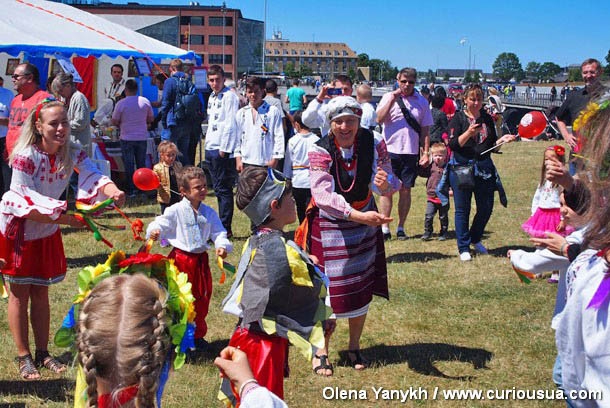 Learn about countries national characteristics – an aim of cultural days and festivals in Denmark, where Ukrainian participation has become tradition.

Ukrainians living in Denmark, used every opportunity to introduce people to the national culture in their country. Ukrainian tents at every cultural event stand out with colorful national costumes, a large number of Ukrainian souvenirs, desserts and traditional national dishes. 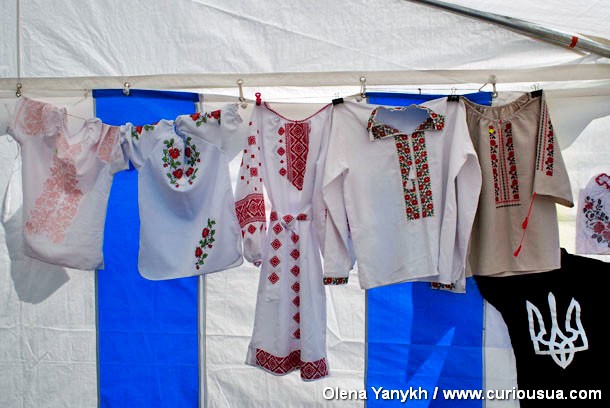 Ukrainian national costume, which could be bought during the Cultural Festival in Elsinore.

Is it possible the impossible happens?

All human actions are driven by a specific purpose. For more than two years it has for Ukrainians in Ukraine and other countries been saving their people and country. They make the impossible on a large scale, and it all starts with small things. 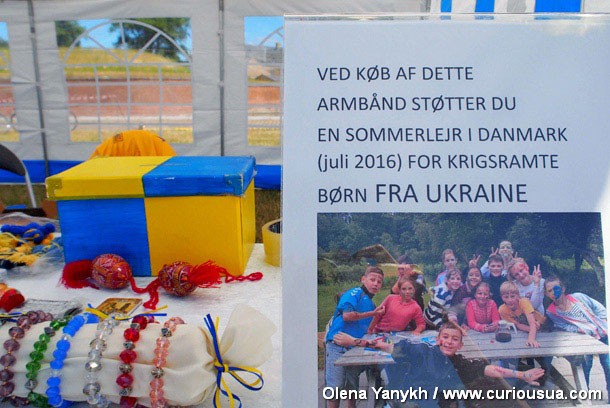 By buying this bracelet you support a summer camp in Denmark (July 2016) for war-affected children from Ukraine.

This year, departments of "Ukrainian Youth Organization of Denmark Lastivka 'in Copenhagen, Aalborg and Ikast invite 60 children whose fathers were killed in eastern Ukraine. The issues of food, accommodation and travel has been resolved. There is a need for funding for the organization of leisure and purchases of gifts for the children. Therefore, when two events scheduled for June 11 – Cultural Festival in Elsinore 2016 and Culture Day-2700 in Broenshoej (Copenhagen) it was not a matter of choosing. Participation in both was a double opportunity to raise money by selling food and souvenirs. 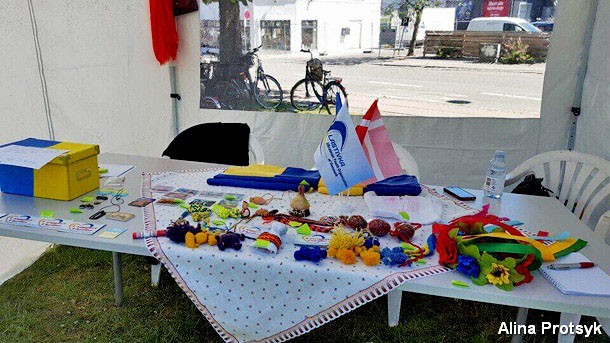 The table with souvenirs in the Ukrainian tent on Culture Day-2700 in Broenshoej.

And Ukrainians were able to do so again. They gathered, distributed themselves in the two cities, and got the result – 3,553 kroner from Kulturfestival Elsinore and 900 kroner (was only allowed to sell souvenirs) by Culture Day in Broenshoej. A total of 4,453 kroner is not the ultimate goal, but a step closer. 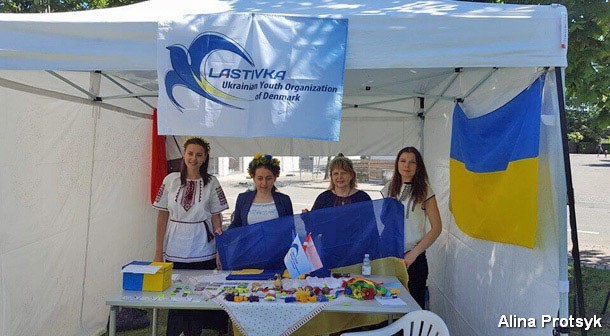 Volunteers and members of the Ukrainian Youth Organization of Denmark Lastivka on Culture Day-2700 in Broenshoej.

A few days later, on June 18, again a festival in the town Roedovre. The whole thing will take place from 10 to 18 o'clock at Roedovregaard, Kirkesvinget 1, 2610 Roedovre.

On Cultural Festival Elsinore Ukrainians participated for the second time. Sunny day, a light refreshing breeze, the music from around Von Scholten Ravelin and the happy faces of both exhibitors and visitors. 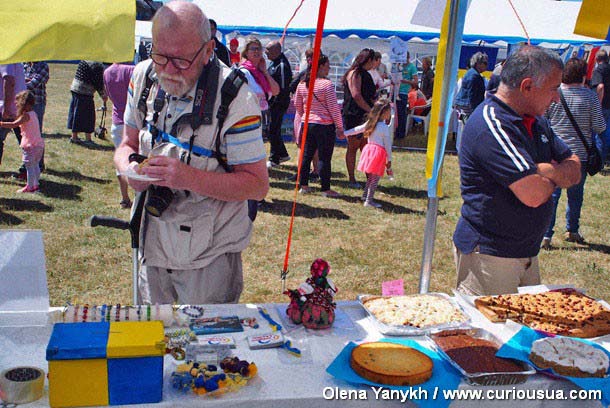 Buyers in the Ukrainian Cultural Festival tent at Elsinore 2016.

The table in the Ukrainian tent was filled to capacity. Here you could buy and taste pirogues with eggs and mushrooms and cabbage - obviously not without lvivsky syrnyk (Lviv cheesecake), and there was a lot of souvenirs from Ukraine. 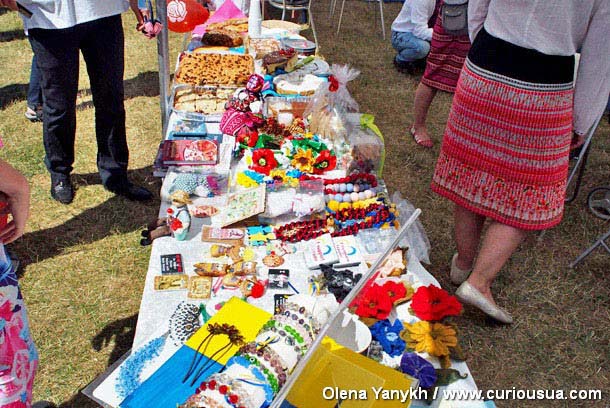 Souvenirs and food would be enough for two festivals.

13 o'clock the tent was filled with children's voices. Children and adults had started preparing for their performance. After half an hour on the sunny meadow, they started to dance in a circle and sing Ukrainian songs. There were many spectators. The young artists and their adult leaders left the stage to great applause and bravo-shouting. 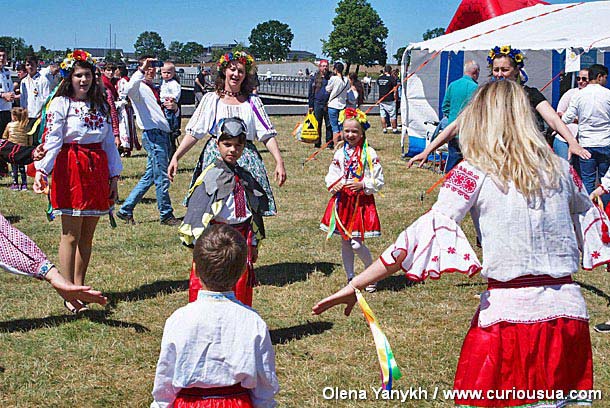 Ukrainians are dancing in a circle and singing the song 'Siskin' (Chizhik in Ukrainian).

Opposite the Ukrainians tent Romania was placed, and last in the row - Turkey, and of such tents were 9, in which all had a neighbor. All spoke different languages, were dressed in their countries' national costumes, there was produced and sold traditional food, but all understood each other and could come to an agreement. The common language was not even the usual English but Danish. So the goal set by the organizers – the association Multicultural Forum – was reached. 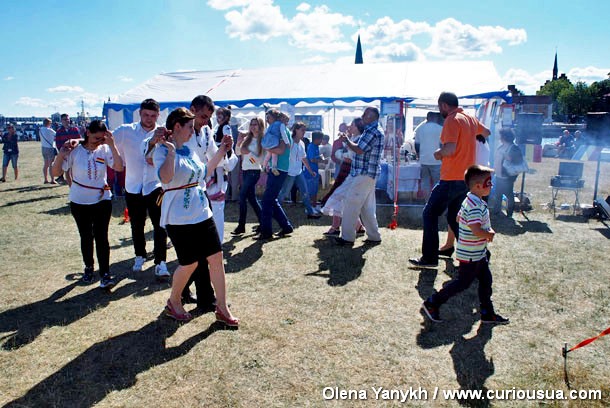 Dancing Romanians. There were a lot of conformity with Ukrainian traditions in their music, dance and costumes.

"At the festivals we earned not only money, but also showed the Ukrainian culture. We invite you to join the new festival: to bake something, make or donate Ukrainian souvenirs for sale", the leader of the "Ukrainian Youth Organization of Denmark Lastivka" Alina Protsyk wrote on Facebook. 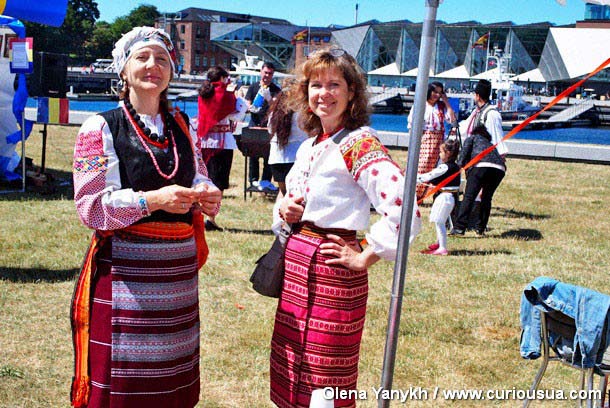 The Ukrainian volunteers Nataliya Bodnar (to the left) and Helena Sørensen (to the right).

At the festival in Roedovre there will be hold a parade in national clothes of each participating country. Ukrainians will go to the streets in embroidered shirts and wreaths. During the day, visitors will experience the performances of the festival participants, among whom are Ukrainians. 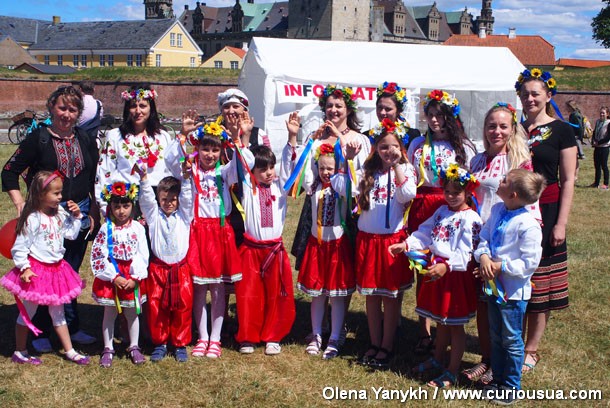