Protection of the Mother of God 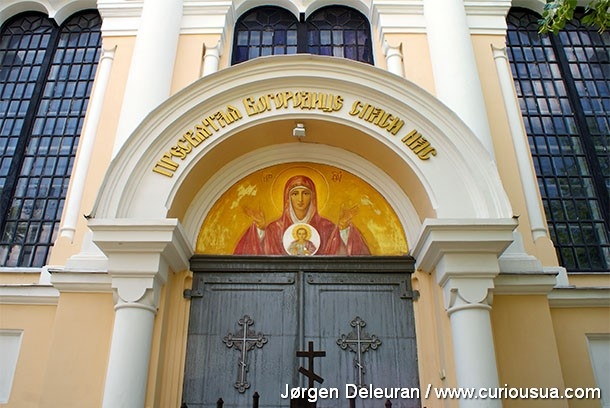 The Christian Feast for the Protection of the Blessed Virgin is celebrated in Ukraine on October 14.

People said the Mother of God covers the grass with leaves, the earth with snow, the water with ice and the girls with a wedding crown. In Ukrainian villages, they still adhere to the old folk tradition of having a wedding after the feast Protection of the Mother of God. Therefore, it is time for a lot of marriages from Pokrova to Pylypivka (a fast in East Christian churches running from November 28 to January 6) in Ukraine.

The feast was introduced in Byzans in memory of the miraculous liberation of Constantinople from the Saracens. The city was surrounded by strangers, and the Mother of God seemed to protect the townspeople – who prayed all night in the church – with her omophorion (garment, ed.) . St. Andrew saw this: beneath the church vault, the Blessed Virgin Mary appeared surrounded by angels, prophets, and apostles, covering Orthodox Christians with her omophorion. This was a statement of victory. And then it happened: soon the defense soldiers came and freed the people from the attacker. 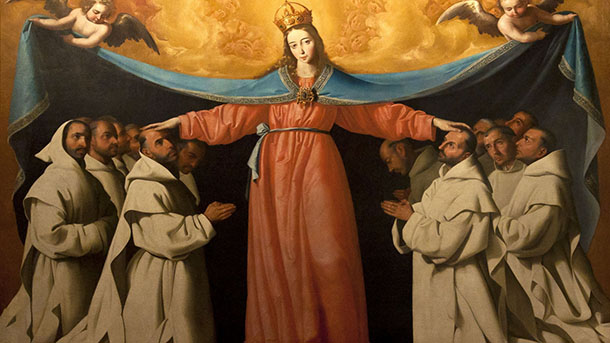 The omophorion of the Mother of God. Francisco de Zurbaran. Photo: Nasonov13.

Among the ancestors who have suffered from foreign attacks for centuries, the legend has gained particular popularity. The Mother of God, called Pokrova, was considered by the Zaporozhye Cossacks as their patroness. Each year, on October 1, according to the old style, with great solemnity, they celebrated this in Sich in the main Church of Holy Protection. On this day, the election of a new chieftain was held.

After the liquidation of Zaporizhzhya Sich in 1775, the Cossacks who went to the Danube took with them the image of the Blessed Virgin. They believed in its power, and so sincerely they celebrated the party that over the centuries in Ukraine it also acquired Cossack content and received another name - Cossack Pokrova. Recently, the Protection og the Mother of God in Ukraine is celebrated as The Day Of The Ukrainian Cossacks, and now it is also Ukraine's Defense Day.

Not to remain a girl

At Pokrova ended the period of marriage mediation and preparation for weddings, beginning after the assumption of the Blessed Virgin Mary. In early October, sowing of winter crops usually ended. It was at this point that weddings began, which lasted two weeks before Pylypivka. There was even one sign: if it snows, there will be many weddings.

According to tradition, the girl was already a young woman after marriage and should cover her head with a blanket or scarf. It is an age-old clothing style for married women, and is tied around the head. After marriage, the girl was covered with a scarf.

There was a big party for the girls: the festive season began for the youngsters and the wedding season for the hosts. And young men willingly attended ceremonial events.

When Pokrova arrives, you can't heat the house without a fire

To make sure that all family members were healthy, the elder housewife took that day an embroidered towel (rushnyk in ukr.), which hung over the Virgin's icon, and hung it over the front door. Family members stood under it for receiving good health before going to church.

During the feast, the masters came and covered the roof of a widow or orphan to shield their fate from misfortune. This indicates the existence of an ancient custom to help members of the family who need it. On the threshold of the «dry house» – they began to heat the oven and threw a piece of manure over the roof three times. And when the stove had heated the house, Pokrova was invited under the roof: «Pokrova, beloved, go to our house. You will sing and amuse us». 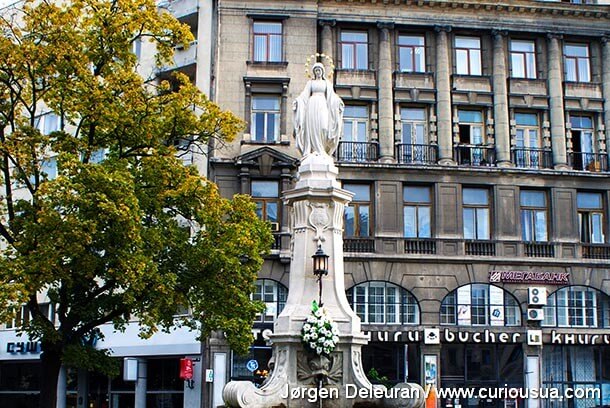 Statue of the Virgin Mary in Lviv.

If the cherry leaves have not fallen off, the winter will be warm and if the snow has not fallen, it will not come in November.

In Carpathian Ukraine, all herdsmen and livestocks from the meadows finally returned to Pokrova, ending Chumak's last journey (Chumak is a man. In the old days of Ukraine: a farmer involved in the transportation and sale of salt, fish, bread and other goods). That's why they said: «Pokrova come – stay seated, chumak, at home».

In October, work in the field was completed, gardeners packed barns and cellars with apples. The owners who managed to collect a rich harvest were happy.