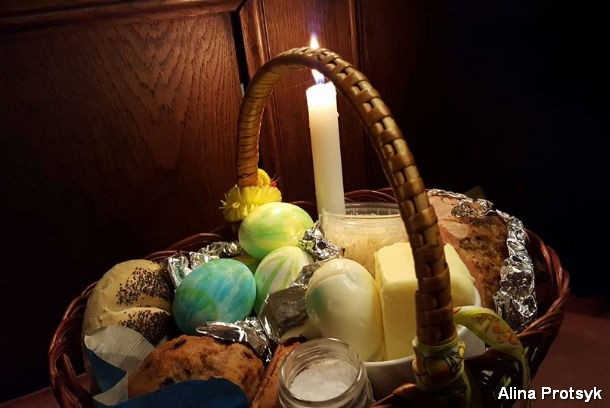 Easter is one of the most honored religious holidays among Ukrainians.

The resurrection of the Savior took place on Sunday morning, the third day after the death of Jesus Christ. Therefore, the believers have a very old custom – it is the one, which remindes that Easter's fasting ends on a Saturday evening and Sunday at midnight or at dawn the Easter feast begins.

Easter's religious ceremony begins with a solemn walk around the church to the sound of bells. This rite became a symbol of the Myrra carriers Sunday walk to the Holy Grave. After this action, the doors of the temple (as for God's sealed tomb) are closed, and the festive morning worship begins. During Sunday's troparion song, the priest opens the doors of the church with a cross as a sign that the resurrection of Christ opened the door to heaven for us.

For a long time, people thought that Easter is magical and miraculous. It was thought that this night you can not sleep like Christmas Day or Ivana Kupala night (St. John the Baptist's birthday). And if you really wanted to sleep, it was not allowed to make a bed so the unclean powers did not come in your dreams. This night, all the witches, ghouls and other representatives of black magic are also gathered near the temple, so during the first song, «Christ is resurrected», get hold of the priest's clothes or touch them. But the fire would cleanse the earth from all evil so that people were sure that where the Easter lights burned, the evil power would not come.

On Saturday, when it just began to get dark, the guys went from all sides towards the Easter lights. Fire was lit on a hill outside the village or near the church, so the flame could be seen throughout the village, or even better, so it could be seen in neighboring cities. For this, a dry willow or oak was searched in a forest or meadow, and they were put on fire. People believed that the evil power was hidden in a dry tree.

Also in ancient times there was a custom that even existed until the beginning of the 20th century, where wheels were wrapped in straw, set on fire and put on the easter fire. The wheel should come into the fire. It became a symbol of health, harvest and livestock, because the wheel always symbolized the sun. And in the houses the day before Easter, an oil lamp or light should have burned all night long.

Easter's party is rich in different folk customs. For Easter as well as for Christmas, the whole family should be gathered because it was the «Great Day». The breakfast began with a prayer, after which the father took a consecrated egg and divided it into as many parts as there were people at the table. On the plate, separate parts were put especially to deceased relatives. With a blessing, the head of the family handed out the egg and said, «In order for us to be blessed with happiness and good health for many years. So that God's Mother will take care of all of us. That we try to grow spiritually and bring the same spirit to our children. God give that these holidays are happily celebrated and that others are waiting. Christ is resurrected!». «Verily he is resurrected!» – answered all those who were present at the party table.

The tradition of starting the celebration of Easter with eggs has been common in Ukraine for a long time because this product symbolized the birth of a new life. In Christianity the egg became the symbol of Christ's resurrection, and like from a dead shell life will arise , the Savior also came out of the coffin for a new life. After eating eggs, everybody ate easter bread and other festive dishes.

For the Ukrainians Easter is the time for remembrance of the dead. People come to the graves of the deceased relatives, remind them with prayers and kind words and ask them for forgiveness. Often consecrated food is also left on the grave.

On this day the priest walks with the church's brotherhood in the cemetery, splashes with holy water and sends it over the graves of the dead. Thus relatives share their sunday pleasure with them.

In general, Easter is rich in customs, whose roots are to be sought in remote pre-Christian times when people celebrated spring and solstice. The Christian religion has devoted much from the ancient folk traditions, giving them religious significance and symbolism and thus recognized them as their own. Among such popular customs are the exchanges of colored eggs (pysanka or krashanka), Easter songs and amusements.

The signs of the party

If the sun on Easter is shining bright, it will rain in three days.

If it's raining or cloudy for Easter, expect a nice harvest.

If the owner sleeps during Easter, the yield of wheat will fall, and if the landlady is asleep – flax.