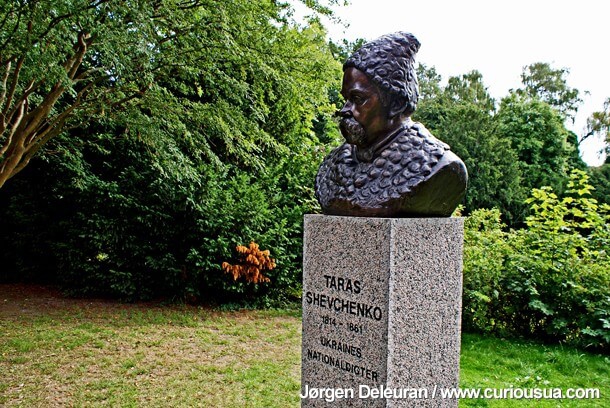 A monument to Taras Shevchenko in Copenhagen. Photo: Joergen Deleuran

The story of his life is more or less familiar to all Ukrainians. Taras Shevchenko – one of the most popular Ukrainians in the world.

The future Ukrainian poet, writer, artist, ethnographer, academician of The Imperial Academy of Arts was born March 9, 1814 in the village Moryntsi in Kyiv province (now the Cherkasy region) in a serf family under landowner Engelhardt. Two years later the boy's family moved to the village Kirilovka. Here Taras went through a difficult childhood.

He was 9 years old when his mother died. The father married a widow who had three children. The little Taras was disliked by the fathers wife, who sometimes treated him cruelly. The only loving person was his sister Katherine, but when she got married, her support ended.

12 years old Taras Shevchenko lost his father. From then the boy's adult life started, full of injustice and cruelty.

Taras Shevchenko loved to write and draw. Despite the fact that he was an orphan, he searched and found his own teachers.

At age 16 he was taken to serve the landowner Engelhardt. First the boy was cook's boy, then – kasatjok. (In the old days it was very popular among wealthy people to have a kasatjok. A boy who had kosakuniform and hairstyle, and served others. For example, delivered a letter).

The enthusiasm for the painting were very firm. Taras forgot many times his work and was punished by his master because of it. Finally, he was tired of beating Taras and noticed his talent for drawing. Engelhardt sent him to a master of painting to study. There Shevchenko did drawings of statues in the summer garden and visited the Hermitage in Saint Petersburg.

During this period Taras met with artist and teacher Ivan Sosjenko. This meeting has played a big role in Taras Shevchenko's biography. In fact through Sosjenko he met the Russian painter Aleksei Venezianov, the Russian artist Karl Briullov and the Russian poet Vasiliy Zhukovski. These people were able to buy Shevchenko free from Engelhardt for 2,500 rubles on April 22, 1838. In those days it was a fortune.

1840-1847 was the days of glory of Taras Shevchenko. During this period he wrote his greatest and most popular works: «Haydamaky», «Perebednya», «Topol», «Naimitjka» and «Hustotjka». They were all condemned to criticism because they were written in the Ukrainian language.

In 1846 the poet came to Kyiv, where he met the in public very active historian, journalist and poet Nikolai Kostomarov. He invited Shevchenko to be part of Kiril and Mefodius Society, whose members were arrested and accused of political treason and got different types of punishment.

Taras Shevchenko got the maximum penalty because of his poems in which he urged the poor to change their lives. He was sent into exile in Orsk fortress, and it made it impossible for him to write and draw. Then the poet was sent to Novopetrovskoe, where he stayed from October 17, 1850 to August 2, 1857. Here Taras Shevchenko could write a few Russian novels – «Princess», «Artist» and «Twins». In these works Taras Shevchenko wrote a lot of his biographical information.

In 1857 Taras was released, but he was in poor health.

The poet had a desire to buy a small house on the river Dnipro. This dream did not come true. On March 10, 1861 Taras Shevchenko died.

He was buried at the Smolensk Cemetery in St. Petersburg, and in May, the ashes was brought to Chernecha (now Tarasova) Gora near Kaniv.

In one of his poems, called «Zapovit» («The Will» in English), Shevchenko wrote that he was to be buried in Ukraine so he could see the Ukrainian steppes and the river Dnipro, which is noisy with the water.

By Taras Shevchenko's death, the poet left a treasure for the Ukrainian nation - a book named «Kobzar», which is considered to be the foundation of modern Ukrainian literature and the literary Ukrainian language.

But the Ukrainians inherited not only the book. We can read thousands of poems by Taras Shevchenko, see his paintings in museums, again and again read his prose. Most of Shevchenko's prose works (novels, diaries, many letters), as well as some of the poems written in Russian, in connection with what some researchers refer to Shevchenko's creativity, additionally also for Russian literature.

Tribute to the great Ukranian

In honor of Taras Shevchenko are named universities, streets, theaters, squares, towns and villages in Ukraine and Russia. The top of a mountain in the Caucasus is named after Shevchenko, and there is a bust of the poet.

Commemorative plaques of Taras Shevchenko are both in Ukraine and in Russia.

There are stamps with portraits and monuments of Taras from various years, including anniversaries.

Taras Shevchenko's monument is installed in almost all cities of Ukraine as well as in many other countries: Denmark, France, Canada, Hungary, Poland, Kasahstan, Moldova, Belarus, Russia and so on.