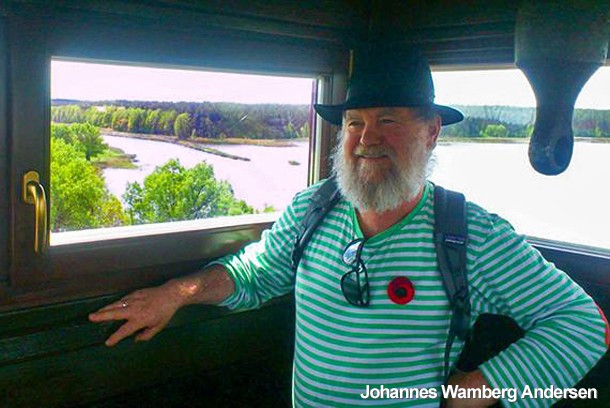 The Danish writer Bjarne Kim Pedersen sent to Newsgerrig.com his work, which is dedicated to the Ukrainian woman-pilot #NadiaSavchenko.

Bjarne Kim Pedersen is one of the Funen author, who participated among the 14 graphic designers and 12 writers who have made the book «Travelling Companion». For «Travelling Companion – H.C. Andersen Fan Fiction» the graphic designers and writers make their works, inspired by Andersen. The book is published 8. August, and has the financial support of Hans Christian Andersen Festivals.

«’Tin soldier!” A small boy shouted and clapped his hands; they were given to him because it was his birthday and he immediately set them up on the table. All the soldiers looked exactly alike except one who seemed a little different…»

Many years later there was a girl far from Denmark whose name signified ‘hope’. She was born as the daughter of a mechanical engineer and a seamstress. She grew up with old motor cycles. At the workshop they were split into spare pieces and then pieced back together before they once again could carry her away on full speed.

The mother would like her to design beautiful dresses at a design school.

However, in the end she got in the uniform. At first as radio operator at the railroad forces, later on she became a paratrooper and the only woman in the peacekeeping operation of Ukraine in Iraq.

Back again she once more applied to the air force. This time she directly contacted the minister who was responsible for all of the soldiers.

And this forth time she was accepted. Four years later she graduated and was allowed to fly high in the sky. She came back and flew with a helicopter unit.

When the students gathered up at the Maidan, she was there too, at first as practical assistance together with her sister. There were a lot of things to do when several hundred thousand people were gathered to remove a corrupt president from office. The atmosphere was a lot like Olga Perekhrest describes it in:

Singing: “…glory’s not perished yet”,
I believe in all heroes’ éclat,
wracked in nighttime regrets
of ultra-rightists and lefts.Mom, I’m now an extremist
our slogans – harsh and tough
our helmets, masks and scarves
all these could be the reason
I will spend 10 years in prison,
away from home, on hold,
and will not come in from the cold.

The system has special skills –
to break our spines and ribs
so today our main duty is
to save friends from the pressure that kills.

What sense is there now to stay silent?
I have nothing to lose now, at least.

Later on the little soldier joined the forces of self-defense, who was in the front rank when Berkut attacked. In the worst days it looked like a battle scene from The Lord of The Rings. She also had to use her first aid education when every fallen activist needed help. Those days the independence square was desecrated with blood of the indignant people.

Many fell and to this very day there burn lights for the killed, back when she and others recreated the dignity of the country.

A new president was elected; unfortunately the country also came under attack by the little green men from the neighbouring country.

She wanted to fight for her county but instead she was put in a department far from the frontline.

The little soldier resigned her own unit and signed up at the voluntary battalion, which she knew from Maidan.

She started training other voluntaries in the art of being a soldier and war medicine.

In an attempt to free some wounded soldiers she was taken hostage by little green men on the 18th of June 2014.

The following day she was shown on a video where she is handcuffed in a place looking like a gymnasium.

On the 20th of June a stinking bag was thrown over her head and she was transported by six different cars. She could look out under the bag and recognize both the model and colours of the cars. She asked her kidnappers questions, which led to her being blindfolded.

The president’s prosecution claims that she crossed the border without permission and was arrested. At the same time they are charging her for being responsible for two Russian war correspondents being killed while they were at a roadblock with the Russian forces.

The little soldier was transported to a prison in Moscow. Even though she served as a soldier in the war, the president says that it – in fact – is not a real war. His soldiers are not soldiers, and if they are, then they are suddenly on vacation with all of their military equipment from the departments they are a part of.

In this modern time it is possible to clarify that the little soldier’s telephone was not at all close to the place, where the two dead journalists’ phones were.

There is no law, not even for soldiers, which gives the president the right to kidnap prisoners to another country.

That is the Geneva Conventions.

«– Trials of war captives must maintain the fundamental guidelines for fair legal proceedings».

She has not received a fair trial. The defence cannot get permission to present evidence of her innocence in the case of the responsibility of the two journalists. At a time there were even demands of her being sent to a psychiatric hospital.

While she is being held in her cell in Moscow she has been elected to the Ukrainian parliament and therefore left the army.

In the newspapers in Moscow she is described as a killing machine in a dress. In a protest against the bad treatment she has received and the illegal restraining she decides to go on a hunger strike.

The little soldier holds a speech from the cell she is being held in:

«Over the last year I have learned to speak Russian. I do not have any hatred towards Russians, even though that is what the prosecutions are charging me for.

I did not kill those Russian journalists.

I have discovered that I have many friends here in Russia. This is my first visit to Russia and so far I have spent all of my time here in jail. I have not talked with many Russians before. I receive your letters, and I know that you are able to think for yourself.

I will never say that Russians are bad. That does not include the lying and corrupt investigators and judges. But you have to understand – there are no bad nations, only bad individuals. I will not say that there individuals, whom I despise and will never respect, are good people. But I respect, appreciate and truly love many Russians. Thank you for your support.

I will not move from this spot, because I believe that the convoy escorting me presents a danger to my life.

They have repeatedly insulted my national and personal dignity and the Ukrainian language. And they have behaved in a vulgar manner towards me.

The convoy and marshals also manhandled my mother, who is a 77-year-old woman. They have used brute force against her.

I will also like to add – I want to be friends with any Russian who will refuse to go armed to my country, Ukraine, and kill my people.

The little soldier is still prisoned in Moscow.

She is getting thinner and thinner because of her hunger strike.

She no longer believes that she will leave the prison alive.

I have, myself, seen her picture on a wall at the museum of the Great War. A picture of her is placed in the hall together with pictures of all of the Ukrainian soldiers, who have been killed action. Everyone surrounded by the remembrance poppies as a symbol of peace.

She is still alive, but how long before her name will join the board of heroes?

I carry a poppy near my heart, little soldier. As a memory of the peace march in Kyiv the 9th of May and of her birthday two days later.

Read 1220 times Last modified on Monday, 23 May 2016
Published in UA's friends
Tagged under