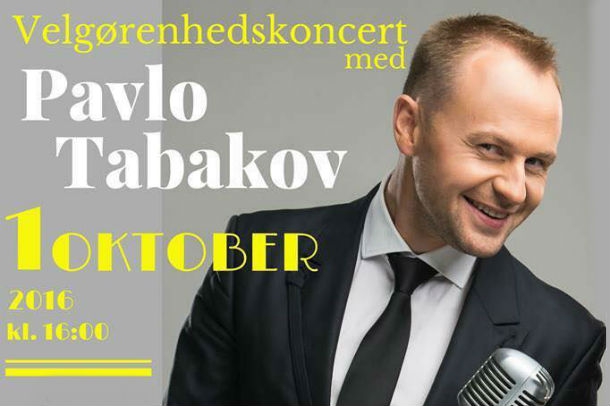 A poster for the charity solo concert of Pavlo Tabakov in Denmark. Photo: Klub Ukraina, Denmark.

1 October everybody will be able to visit the singers concert. Tabakov has a great voice, which spans three octaves.

Charity Concert with the participation of Ukrainian artists is a traditional annual event in the organization Klub Ukraina in Denmark. This time, the Ukrainian singer, musician, composer and arranger Pavlo Tabakov accepted the invitation to hold a charity concert. He is the winner of the fifth season of the TV project "Chance", semi-finalist in the second season of the show "Ukraine Got Talent" winner of the TV project "Voice of the country-2", and participated in the national selection for Eurovision 2011.

This is Pavlo Tabakov's first solo concert in Denmark. The event is for charity. All collected funds will by the organization Klub Ukraina be transfer to the European clinics where sick children come for treatment.

The concert will take place on 1 October, starting at 16 to 18 in the Concert Hall Bygningen, Ved Anlæget 14B in Vejle.

The price of tickets via the internet platform nemtilmeld.dk is per. adult 120 kr., and for children (up to 12 years) 60 kr. The organizers warn that tickets at the door will be more expensive – respectively 140 and 70 kr.

During the concert there will by tradition be held an auction and all proceeds from it will go to help sick children, as the charitable organization Help Sick Children helps.

The concert is a great opportunity for Ukrainians to an emotional journey back to their homeland, and together with Pavlo Tabakov sing well-known Ukrainian songs. Other guests of the concert will be able to gain better knowledge of Ukrainian culture.

In the repertoire the singer Pavlo Tabakov has both lyrical songs and quite energetic songs. Klub Ukraina advise that you put on shoes that are comfortable to dance in, because it becomes difficult to sit still on one's place.