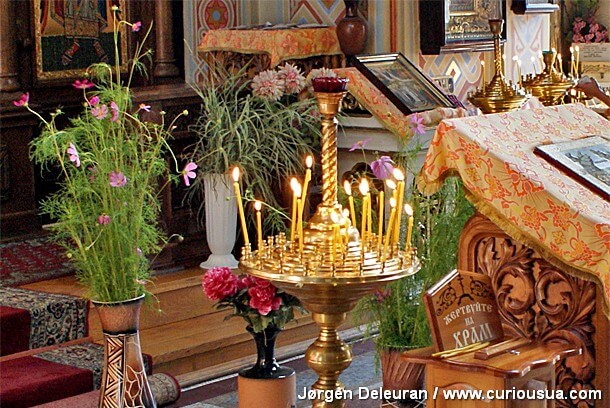 Most Ukrainians celebrate Candlemas by the Julian calendar, on 15 February In Catholicism the feast is celebrated 2 February, after the old style.

Presentation of the Lord (among Ukrainians also called Gromitsa or Zimobor) completes the circle of the Christmas celebrations. It is celebrated on the fortieth day after the birth of Jesus Christ – 15 February. Along with Christmas Candlemas is one of the most inportant church holidays during the year.

Simeon and The Savior

This day people celebrate the evangelical event when The Savior's earthly parents – Mary and Joseph – brought the child to the temple. There they met the virtuous Simeon, who God had promised that he would not die before his eyes had seen The Savior. According to the legend, Simeon waited for this event for almost 300 years. The Holy Spirit called him to the temple, where he met Jesus' parents. Simeon took him in his arms and said: «Now let your servant go in peace, O Lord, as you said, because my eyes have seen your salvation». The old man Simeon is called the God-receiver because he took Jesus Christ in his arms.

The meeting between winter and spring

In our country Candlemas was not only a church celebration. According to popular belief, winter today meets spring. Winter goes back there where it is spring, and spring takes over winter's place. On the way both seasons meet each other and refer to each other. Spring says: «God help you, winter!» And winter replies: «God bless!» People thought that winter meet with spring twice a year: 15 February at Candlemas and 22 December, the day of St. Anne. People imagine winter as an elderly lady and spring as a young woman.

At Candlemas, winter is bent and accompanied by the old man Frost. The woman's sheepskin jacket is patched and the boots tattered, she hardly moves, holding a basket with ice. But spring comes in the form of a happy and beautiful girl in shirt and with a wreath on her head. In her hands she has a sickle and a sheaf of wheat or rye. In folk tales the young spring and the old winter argued about which one of them should go and who should return. But if the evening was warmer, it meant that spring had won over the winter, but it could also be the opposite way around.

Gromitsa and the water's feast

On this day people went to the temples to sanctify candles and water. From the church the brought candles called gromitsa (grim – thunder, on Ukr.) to their home, and lit them in front of icons during a lightning storm, so they protected people and cattle against the thunder. These candles are also used to give into the hands of a dying while above it prayers are read for the dying. At Candlemas a gromitsa candle is lit to the spring that flooding should not destroy crops and frost will not break the trees. After the name of the candle the Candlemas feast was formerly named Gromitsa.

For the blessing of the water a new bowl should be used, and the nourishing fluid shall be carried home, while keeping a close eye on it so it does not disappear, because this water is attributed magical properties and the power to cure. People rubbed it on their sore places, and thought it would help. Best of all this water protect against «bad» eyes.

The main signs of spring

In the old days, when Chumak (Ukrainian traders in the 16th-19th century) went on a long journey, they got bread sprinkled with salt and Candlemas water for themselves, oxen and carts with the words: «God save you!» Likewise when a father sent his son to war, he sprinkled him with Candlemas water and wished him a happy return. The Candlemas feast relate to many different beliefs and omens. They are reflected in proverbs.

For farmers, it was important to know when the winter ended, and when the long-awaited spring would come. That's why you at Candlemas looked at the weather and remembered its characters. Heat and thaw today announced the peasants an early and warm spring, and if frost – a long winter. If it at Candlemas was snowing, they could expect a rainy spring. Snowstorm promised late and cold spring, and cloudy weather reported frost. People also kept an eye on the length of the icicles. If they at the evening of Candlemas were short, in the spring there could fall a little bit of snow, and if they were long, there could be expected strong snowstorm.

Candlemes was a special feast for the beekeepers. They thought that drops of water from the roof this day promised them a good honey harvest. Morning snow informed about early harvest of rye, and thaw - the harvest of wheat. Wind said there would be good crop of fruit. And if glades at Candlemas was dried out by the wind, spring could be expected within 40 days. This is the content that comes from our ancestors in ancient times and is one of the most important holidays in February – Candlemas.