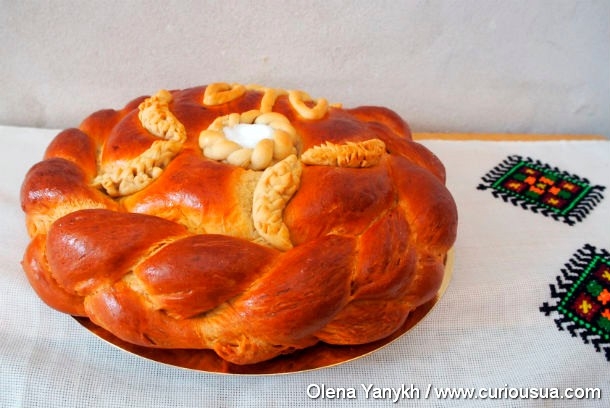 An example of a korovaj baked in the Ukrainian diaspora in Denmark. Salt is poured in the middle of the loaf to protect against enemy forces and enchantment. Photo: Olena Yanykh.

For the ancestors, the Ukrainian bread was the element that united a whole system of wedding ceremonial acts.

As a wedding bread (korovaj in Ukr.) it was not only known in Ukrainian traditions. Many other nations often used it under non-ritual forms.

The bread tradition developed in Ukraine over a long period. In addition to the bread itself (korovaj), people baked a lot of wedding figures. Each product represented its own ritual function in a holistic wedding drama.

Korovaj was the main symbol of the party (its absence on such a day was perceived as, that the wedding was worth less, even as a not legal wedding), so it became the hallmark of the most dramatic ritual acts: blessing of the young, covering of the young, unification of the clans.

Only that kind of bread was made for the first marriage, it was not baked for widows and widowed men who remarried, and a celebration on the occasion of a wedding without korovaj was not considered a wedding, but as a celebration.

Wedding bread for the bridal couple

Baking bread – the oldest ritual for Ukrainians. It symbolized the community's inauguration of a newly formed family.

This was one of the important rituals of the traditional Ukrainian wedding ceremony. Because the wedding bread symbolized family happiness and prosperity. The tradition of bread baking has some differences in different regions of Ukrine. It was baked on Fridays or Saturdays with the bride's parents (in the eastern regions), with relatives (in Podillia and Volyn) or with both families. Often, relatives participated in this ritual, symbolizing the union of families. To bake korovaj, the bride and groom's relatives invited especially honorable married women. Those who had demonstrated in their own lives their ability to create and maintain happiness, harmony and prosperity in the family.

Around the process of baking a wedding bread, there were many ritual acts. Korovajnytsi (so the women who were baking korovaj were called) were usually tied together with towels while kneading the dough and shaping the decoration. This was to make the future family strong. Korovajnytsi made the sign of the cross over the stove and the wooden spade used to put the bread in the stove. Over the baking itself was also made the sign of the cross, and with songs and sayings, they went around the dough so that it should rise well and be beautiful and fragrant.

People thought it was a good sign when an odd number of korovajnyts gathered (seven women were the best). In some areas an even number was invited: so that the newlyweds lived together for a lifetime. In addition, korovajnytsi had to be in their first marriage and live in harmony. There was a belief that a successful baked bread would bring the young people happiness, a cracked – portraying a divorce and a distorted one – an evil fate.

The ceremony of preparing the bread with blessing from the mother began – accompanied by songs that brought on the joy to the family on the occasion of the marriage.

While mixing dough for the bread, funny songs arose. Korovajnytsi started the song about wedding bread and what should be added to the dough to make it lush. When the bread was put in the oven, the oldest woman knocked on the four walls with a bread shovel, and all the others raised the dough bowl and danced around the house, banging it in the ceiling three times: "so the bread would grow well and be good". Korovajnytsi sang, glorified the oven, called it golden and asked it to bake a beautiful bread. In some regions (for example, in the Poltava region), dezha (a wooden bucket for mixing dough) was crushed.

The most popular bread form in Ukraine was a high round bread decorated with flowers, cones and dough birds. All this symbolized for the people wealth, fertility and marital faith. An indispensable feature of the decoration of wedding breads was: periwinkle, oats (or an oak of wheat or rye), and viburnum berries. They were to contribute to the strengthening of marriage, happiness and prosperity.

Korovaj was the real decoration of the wedding table, symbolizing prosperity and happiness, and at the end of the party it was broken (not cut, not to "kill" the spouses' happy fate) and split among all the guests. In response, they thanked the young people and brought gifts.