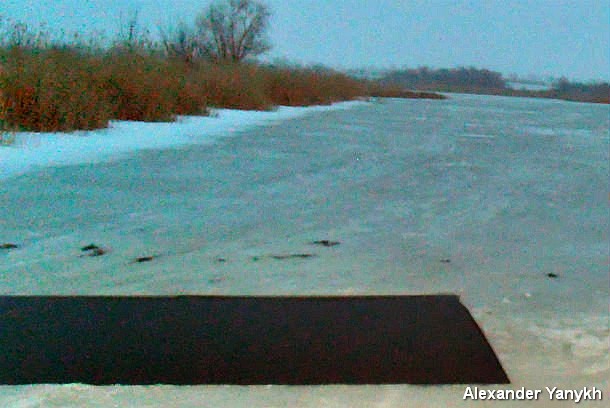 A hole, that was carved in the ice on Mokrie Yaly river in the Donetsk region for the Epiphany celebration in 2015. One must immerse himself three times in the icy water. Photo: Oleksandr Yanykh.

Epiphany – the third and last major celebration of the cycle of Christmas and New Year. Among people called the Jordan or Baptism.

The feast came to Ukraine together with Christianity and got one of the greatest seats of honor among the Ukrainian people's traditions. Orthodox and Greek Catholics celebrate on 19 January (the baptism of Jesus, ed.), so it coincides with Epiphany.

The feast is associated with Jesus' baptism. When he reached 30, he received baptism from John the Baptist in the Jordan River. And when he went to the shore, he heard from heaven, God the Father, who called jesus his Sun. And to Christ the Holy Spirit came in the form of a dove. The feast also has another name – Epiphany. The believers think that it confirms the Holy Trinity sacrament. On this day, according to Christian teaching, God appeared in three persons: God the Father – in the voice, the Son of God – in the flesh, the Holy Spirit – in the form of a dove.

It has long been so that the peasants thought that at midnight on the eve of Baptism (the Ukrainian name for 19 January – Jesus' baptism, ed.), the water in all water areas is restlessly. There were even some brave men who went to the river at night to observe this phenomenon, but the water at this time was of course covered by ice, and what happened under the ice, remained unknown. But if the water is fetched at midnight, it has healing effect. «Experienced» peasants hid it behind icons in case of injury or serious illness.

A week before the feast the young men made a hole in the ice-covered river and sawed a large cross out of the ice, put it next to the ice-hole and poured it over with the juice of beetroot, which colored it red. Near the cross they constructed a throne of ice. All this was decorated with an archway made of spruce or pine twigs to make a «royal port».

Morning worship took place in the church. Then they all went in procession to the cross by the river. In front was carried a wooden cross and church banners. After a short service the priest dipped a cross in the hole. When the water was blessed, people came and fetched water from the hole in their household utensils, and the most courageous boys swam.

Everyone who came to «Jordan» – some on horseback, others in the sled – fetched water in buckets and watered the horses, so they should be strong and to prevent disease. Since ancient times, the Church considers the Jordanian water as a great shrine. The water held throughout the year. Interestingly, it got the power to heal body and soul. Also houses were sprayed with the water, in order to prevent any accident. Everyone knows that sanctified Jordanian water can be stored for a long time and does not deteriorate.

After the blessing of the water people turned back to their homes. The residence, farm, barn and cattle were sprayed with healthy water. After having performed this ritual, the father sat at the table and after him the whole family. First they drank the holy water, then ate. During the day, the girls ran to the river to fetch water from the hole. They poured water into a large bowl and on the bottom they put a bunch of sheepberry or a necklace and washed their faces – until they were beautiful.

Wash me from all distress

At the Baptism-feast when meeting someone on the street, or waking up in the morning, the Ukrainian ancestors said: «Christ is baptized!» And the people answered: «In the River Jordan!» From ancient times, people thought that water and fire are the basis of all earthly life. Therefore, the sanctification of the water has from immemorial time been given much attention. Ukrainian healers also knew how to «conjure with water».

After this feast it becomes less cold. Therefore, people say: «Freezing very hard or not, we have already passed Baptism». If people saw that the sky this day was overcast, then all wheat would grow well. If it was overcast only in the East – rye would grow well, in the South – millet, in the north – buckwheat. Clear skies and cold weather on Epiphany showed that the summer would be dry, but cloudy and snow predicted a bountiful harvest. If there was a starry night, there would be a good harvest of nuts and berries. If the trees on Baptism were rimy, on the corresponding weekday in spring you had to sow spring wheat.

The next day people turned back into normal rhythm of work and celebrated the feast of John the Baptist. They gave the remains of the food from the rituals to the animals and planned the household chores. After Jordan came a few weeks when they ate meat. During this period, it was still allowed to celebrate wedding and sing songs. But then the strict fasting came.