Christ is born! Glorify Him! 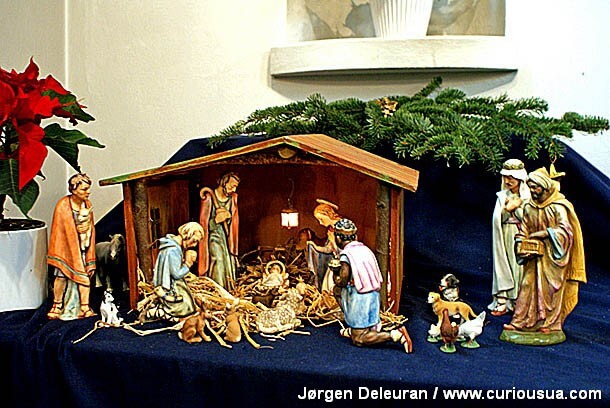 The great Christian feast – Christmas – is celebrated in Ukraine on 7 January. This is the day the Savior was born - the second largest feast after Easter.

According to church rules Christmas is followed by a four-week fast. During this time the hostess tried to do all the household chores: whitewashed the living room, decorate it with paintings, hang up the best rushniki (towels with embroidery, red.) and spread out blankets. The Holy Corner was especially solemnly decorated – there was put a lit candle or oil lamp. Nearby was the symbol for all three main winter celebrations – didukh. This sheaf was made of wheat or ears of rye, which were collected at the end of the harvest. Grain from didukh-sheaf are stored for several months, and then blended into the new season's seed. The peasants believed that it gave a rich harvest.

Ukrainian Christmas has pagan tradition and is associated with ancestor worship, worship of spirits of the dead. Therefore, stewed fruit and especially festive Kutia standing on each table are in fact remind dishes.

Early in the morning on 7 January Ukrainians rushed to the church to honor the newborn Christ, with a sincere and cheerful greeting: «Christ is Born – Glorify Him!» After the service was completed, the whole family gathered for a celebratory dinner. Thus began a great meal. Both adults and children waited impatiently for it. They ate blubber and liver, sausage and different smoked meats, all that kind of food the soul had missed during Lent.

For the Holy Night (Svjata Vecherja UKR., Ed.), the hostess has to make 12 dishes, symbolizing the coming months and the 12 disciples. Kutia was the main course. In some regions it is made thin and the other thick. Fixed ingredients are nuts, poppy seeds, raisins and honey. Usually the host tastes the first spoonful of the delicious dishes.

After lunch a rest begins, and in the evening you go to visit the family. At this celebration the tradition is that the family gathers so that children who are married go to their parents. It is advisable not to be late, because a omen is telling that you then the whole next year will be too late. A longtime Ukrainian tradition on this day is to forgive wrongs committed with or without the will, so that the soul can be pure and feel the joy of life.

(Kolyada – the popular name of the Slavic Christmas Eve, Christmas and the time from Christmas to Epiphany. The main significance – Christmas Slavic ritual realities. Ed.)

For centuries, the Ukrainian people had a wonderful custom to wish each other happiness, health, prosperity and wealth. Already on the day before Christmas, people started to go from house to house, where they with songs and carols (kolyadki in Ukr., ed.) congratulated the hosts, wished them well-being and prosperity. This event did not start in all regions of Ukraine at the same time. For example, in Pokut'e (a historic area in the western part of Ukraine, ed.), the children went with Christmas songs already on the Holy Night, and in Slobods'ka Ukraine (a historical region in the northeastern part of modern Ukraine, ed.) and in Hutsulschyna (historic and ethnographic hutsuls land, located in the southwestern part of the Ukrainian Carpathians, ed.) - only on the first Christmas Day, after the service in the church. In Podol'e (historic and geographic area (Podolsk Hill) along the northern tributaries at middle Dnestr (eg Smotrych, Zbruch) and upstream of the river Southern Buh, ed.) they sang traditional Christmas carols in the morning on the second day of the celebration. These rituals were carefully prepared in advance – they made octagonal stars and masks of Goat and Bear.

The first omens, in the ancient Ukrainian ceremonies of the birth of Jesus Christ, were children and young people who went from house to house singing carols and schedrivky (Christmas folk songs, ed.). They looked forward to being treated to bagels, apples and nuts. It was believed that the more children who would visit the house, the more generous the new year would be towards the hosts.

It is interesting that the adult kolyadnykiv groups (those who sing Christmas carols, ed.) mainly consists of young men. They choose their ataman (leader from Cossack time, ed.), who is clever, witty and has a reputation among the peasants. The young kolyadnyky-men go into the house, singing below the icons, and then sit at the table, but do not eat long time, then they bow to the hosts and go to another house.

It is fascinating to know that the word Kolyada comes from the name of the Roman New Year, which comes a week after the merry Saturnalia (Roman religious celebration, red) in the second half of December. Subsequently Ukrainians began to call Christmas songs schedrivky because this evening was generous and rich. And one of the most famous Ukrainian carols is still the song «Dobryj vechir tobi!» («Good evening to you!»).