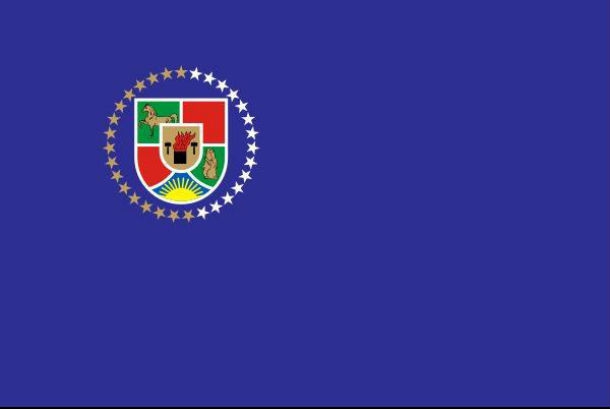 The flag og the Luhansk region is cobalt-colored. In the upper left quarter there is a circle of 17 gold stars and 14 white stars. They represent the 17 districts and 14 cities. In the middle of the circle is the region's coat of arms. The flag is characterized by being embroidered in silk and lurex. The flag was approved on 4 September 1998. Photo: www.loga.gov.ua

The Luhansk region has an economically advantageous position and has a strong base for industrial development.

The Luhansk region is in the eastern part of Ukraine and borders on two Ukrainian regions – south-west to the Donetsk region and northwest to the Kharkiv region. The Lugansk region's northern, eastern and southern neighbors are Belgorod, Voronezh and Rostov regions of Russia.

The Luhansk region with the administrative center in Luhansk is 26.683 km².

Through the Luhansk region flows 96 rivers, of which the largest is the Seversky Donets, Aidar and Luhano.

Industry. With the development of industrial production until the beginning of the war in Donbas the region ranked as number 5 in Ukraine. The leading role is within the fuel and energy, namely coal, which accounts for 18% of total production. Also highly placed is the production of primary oil refining, metalcutting machines, soda, synthetic resin and plastic, glass, and corrugated cardboard.

There is potential for machine building, food, wood processing and textile industry and production of construction materials.

Agriculture. The agricultural sector in the region is represented by the production of cereals and oilseeds, and vegetables.

Natural resources. The Luhansk region is rich in coal of high quality, which represent a third of the total number of known coal deposits in Ukraine.

In the region there are deposits of natural gas, limestone, salt, lime, marl, clay, stone chippings and sand.

The region is also home to health centers with medical therapy, and has deposits of saturated bromine and iodine, which are in the cities of Luhansk and Starobelsk. 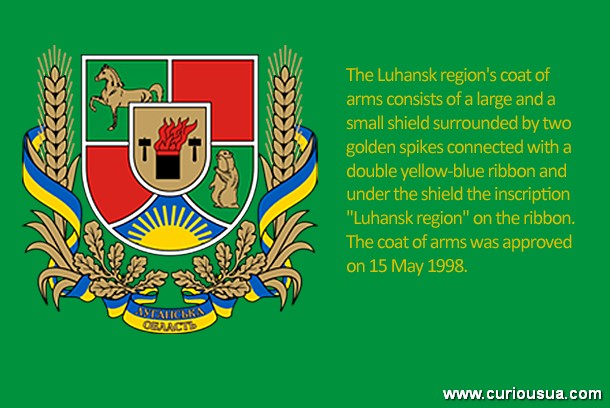 The Luhansk region is divided into 18 districts, covering 37 cities, 109 villages and 792 urban settlements.

Vector for regional development is industry.

To the beginning of the war the Luhansk region was inhabited by over 2 million people, and was thus the sixth largest region in Ukraine.

86% of Luhansk's residents live in cities, indicating the urbanization of the region.

In the recent years there has been a tendency that the number of people in the Luhansk region has been reduced.

The Luhansk region can hardly be called a tourist area, but it can be proud that it has 11 monuments on the list of the greatest monuments in Ukraine. The most interesting of them - the fanciful rock ”Sheep Pans”, the educational and cultural center ”Dals House-Museum”, Mstsyhovskohos cottage and a unique park with stone sculptures that were inherited from the Polovtsian people of the 11th century.

In the early Middle Ages until the 18th century, the area of the current Luhansk region has at different times been inhabited by various tribes and peoples - Pechenegs, Kuman, Turks, Crimean Tatars.

In the 18th century the Don Cossacks  colonized the area and worked to identify coal deposits, and in 1796 the first iron casting factory in the southern part of the Russian Empire was built. In the 19th century the area went in the direction of coal and metallurgy.

The Luhansk region got the current territorial limits already in 1938, but until 1990 it was called Voroshilovgrad region.