The Donetsk region – one of the largest industrial regions of Ukraine 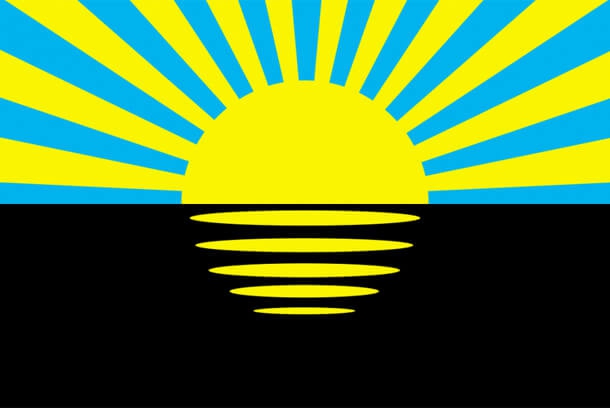 The top of the flag is blue with the image of the rising sun, symbolizing the location of the Donetsk region in eastern Ukraine. Black base – coal as the main industry in the region. And the Azov Sea – the yellow ovals – the sun's reflection in the water. Photo: www.donoda.gov.ua

The Donetsk region is one of the most economically developed regions of Ukraine.

The Donetsk region (oblast) is located in the eastern part of Ukraine. Its regional center is the city Donetsk.

In the Donetsk region area flows 110 rivers, 47 of them are more than 25 kilometers each. The largest river is Siverskyi Donets. All rivers in the area belong to three water areas: the Azov Sea, Don and Dnipro.

Before the war in 2014 the Donetsk region was home to more than 5 million people (10 % of the country's population) with 90 nationalities.

The Donetsk region – the largest industrial region of Ukraine, which until the beginning of the war in Donbas in 2014 performed about 20 % of the state's industrial production. The main sectors of the economy are coal (Donbas), iron and steel, coke, chemicals, heavy industry, building materials, electricity and transportation.

The coal industry. In the region, the most companies are in the Donetsk coal basin. Development of stocks in Donbas arose from east to west, so the most promising deposits of coal are now in the west (Krasnoarmijsk, Dobropillia, Vugledar). In the eastern parts of the area are established anthracite mining (Torez, Snizhne, Shakhtarsk).

Natural resources. The region has abundant mineral resources. The main minerals are coal (reserves is estimated at 25 billion tons), rock salt, limestone (provides raw materials for various industries), potassium salt, mercury, asbestos, graphite and others. There are about 100 species, including iron ore and rare earth elements.

In the Donetsk region, there are also started searching for diamonds. In the postwar period, in the secret mines, there was excavated radioactive materials to the first Soviet atomic bomb.

Agriculture. The region's heritage is the fertile black soil.

In the agriculture crops is above all represented by wheat, barley, maize and sunflower. Livestock represents milk and meat production.

Tourism in the Donetsk region

In the Donetsk region, there are many theaters, museums, monasteries, cathedrals and churches, architectural monuments and memorials.

The seaside resort Sviatogirsk is famous for a unique cave monastery carved into the chalk cliffs above the river Siverskyi Donets.

«The Khomutovskaya steppe» in the southern part of the Donetsk region is a pristine corner of Dikogo Polia (Wild Fields), which have never seen a plow.

Belosaraiskaya and Krivaya spits, stretching several kilometers into the Azov Sea, are in spring and autumn «transit station» for a myriad of migratory birds.

Not far from the regional center is Ukraine's largest artificial forest – Velikoanadolskiy (2,543 hectares). In the middle of a green oasis is a hidden lake with curative radon sources.

The Donetsk region has its own Yalta, Gurzuf («Urzuf») and a number of settlements with Crimean names. It is the memory of a mass movement of the Orthodox Greeks to these places, which took place for more than two centuries ago.

In the administrative-territorial structure in the region there are 28 cities and 18 districts that are under regionally subjugation.

90 % of the population in the Donetsk region live in cities.

In the Donetsk region are railways belonging to the public administration «Ukrzaliznitsia» (UZ) and related to the Donetsk railway.

The main waterway in the area – Siverskyi Donets. Mariupol is the Azov Sea port.