President of Ukraine in Denmark. Review of the visit. 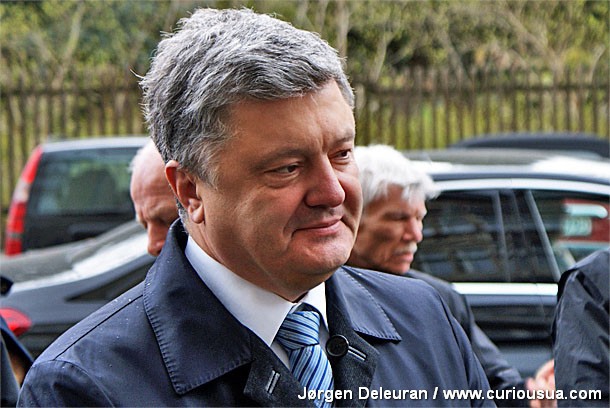 The President of Ukraine Petro Poroshenko during his visit to Denmark. Photo: Jørgen Deleuran.

Petro Poroshenko met with the Queen of Denmark, the prime minister, the chairman of the parliament, the government, business people and the diaspora.

It was the second official visit to Denmark by a president of Ukraine. The first visit Viktor Yushchenko paid in 2007.

Petro Poroshenko got an audience with the Queen of Denmark Margrethe II. The president thanked Her Majesty for aid to Ukraine. 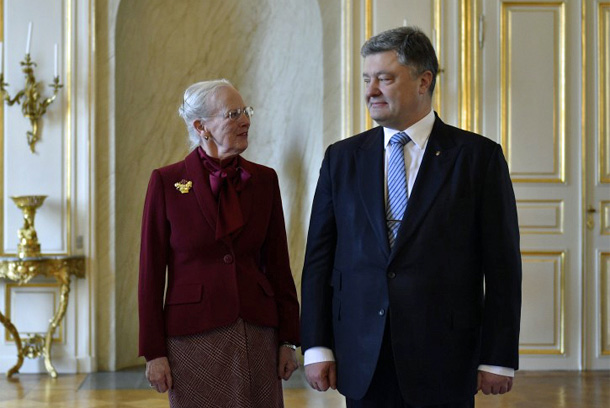 Queen Margrethe II of Denmark and President of Ukraine Petro Poroshenko during the audience. Photo: www.president.gov.ua

During the visit, the head of the Ukrainian State had a meeting with the chairman of the Parliament of Denmark Pia Kjærsgaard and members of the Danish parliament, where Denmark's active work in the OSCE Parliamentary Assembly and the Council of Europe to support of Ukraine was noted. 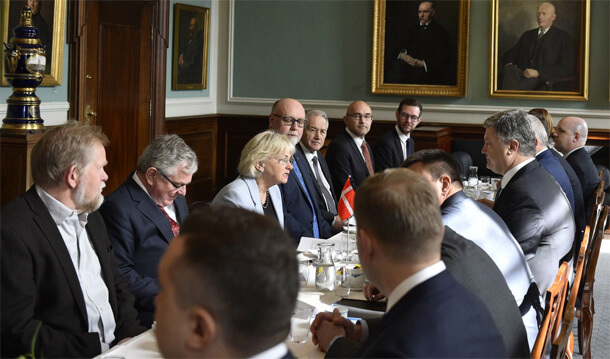 Afterwards the president visited the house, which in 1919-1922 housed the diplomatic mission of the Ukrainian People's Republic in Denmark. 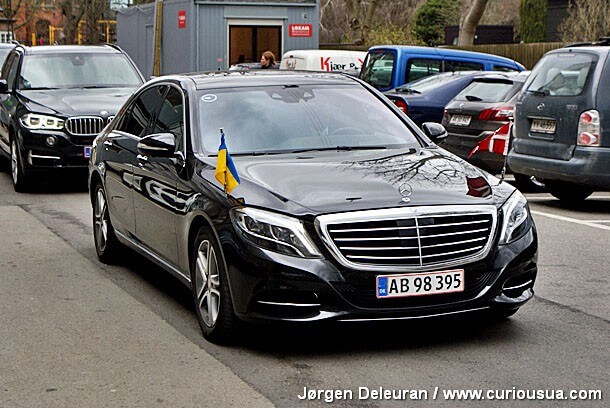 Chairman of the Danish-Ukrainian Society Ivan Nester Nielsen received by First Deputy Prime Minister Stephen Kubyv a book entitled «About Ukraine, about its fate, about honor and freedom of the people. 100th anniversary of the Ukrainian national revolution in 1917-1921». 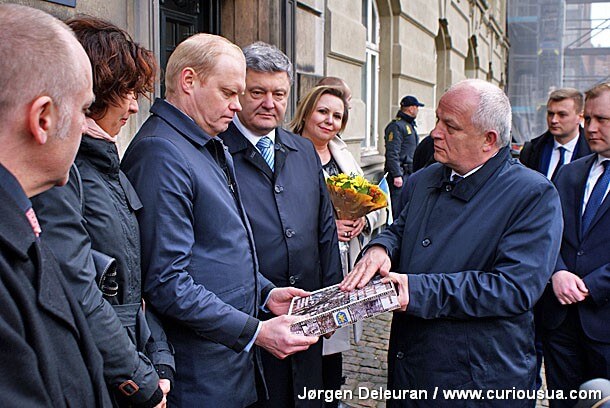 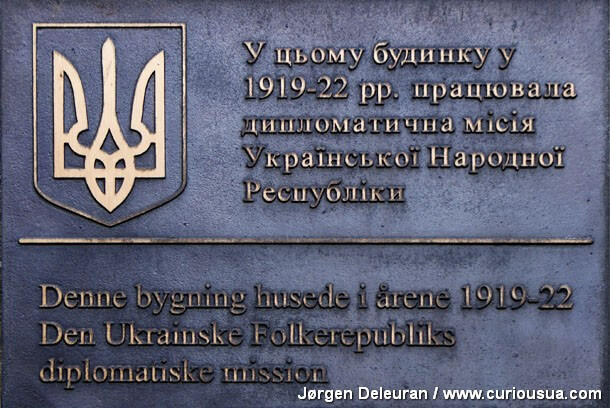 The plaque says: This building housed in the years 1919-22, the diplomatic mission of The Ukrainian People's Republic.

Directly from this house, the leader of Ukraine went to the monument of Taras Shevchenko to meet with the Ukrainian diaspora and Danes, who are friends of the country. 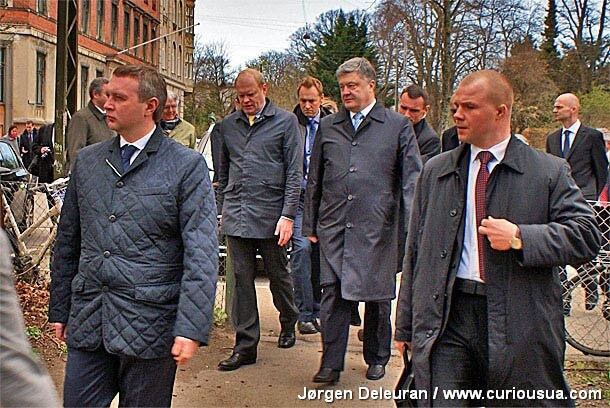 Poroshenko thanked people for their active role in supporting Ukraine. 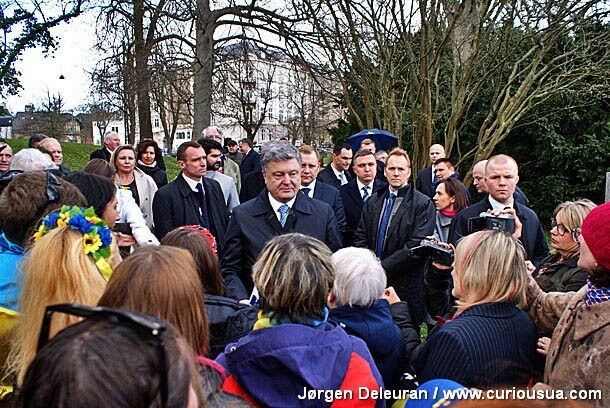 During the Ukrainian President's stay there was also a meeting with the managements of the leading Danish companies, where it was stressed that in spite of the ongoing Russian aggression, Ukraine succeeded to macroeconomic growth: reducing of the inflation, introduction of reforms in the energy sector, establishment of an anti-corruption structure and having started the process of decentralization. 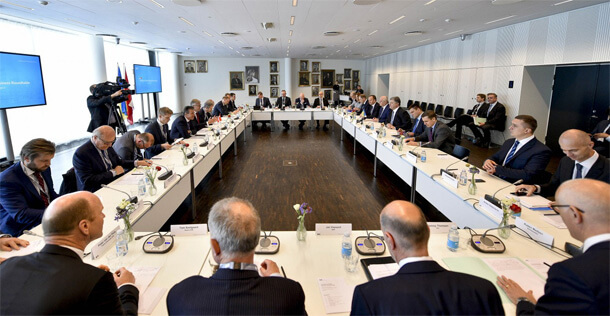 The meeting was attended by the heads of the companies Vestas Wind Systems A/S, Carlsberg Group, JYSK, Axzon and others.
Photo: www.president.gov.ua 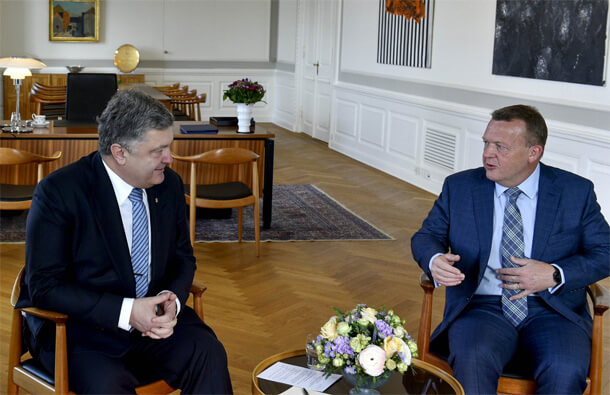 The Ukrainian President during the meeting with the Prime Minister of Denmark. Photo: www.president.gov.ua

At the press conference, which ended the day, Petro Poroshenko stressed in his speech that Denmark is an important partner of Ukraine and «Denmark is well aware that to protect Ukraine is to protect Europe». 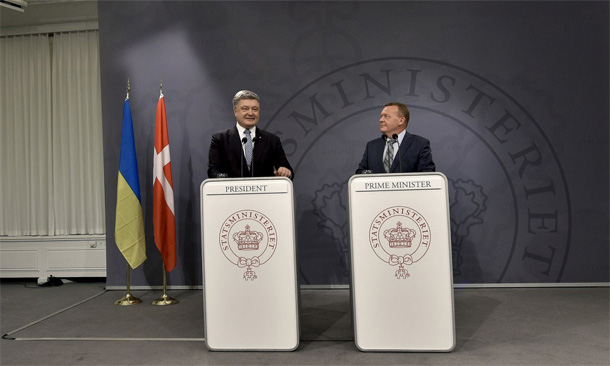 «International pressure on Russia should be continued. EU sanctions must remain until the Minsk Agreement is fully implemented», Lars Løkke Rasmussen said and stressed that «Ukraine is not alone and will not be forgotten». 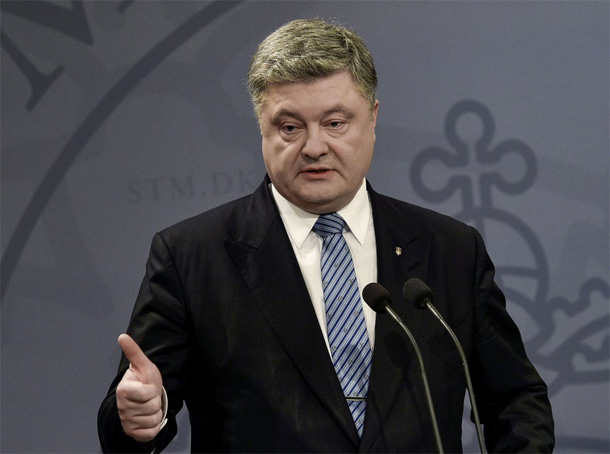 The President of Ukraine Petro Poroshenko answered after his speech the journalists' questions, and finally said, «I leave Copenhagen with full confidence in the strong friendship between our countries».