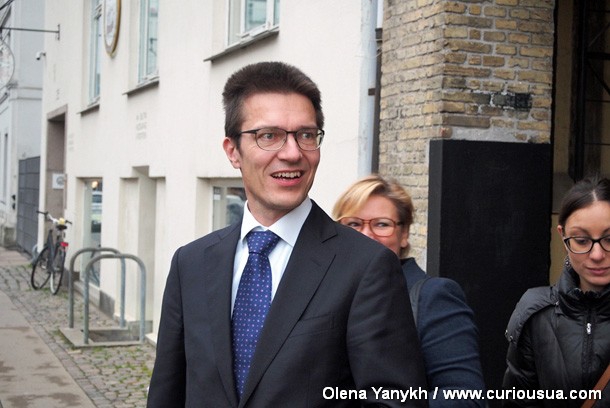 Recently the Ambassador of Denmark in Ukraine, Christian Dons Christensen, received an award from the Ministry of Foreign Affairs in Denmark for his tweets under the hashtag #workingfordk. Photo: Olena Yanykh.

Today the Danish Days begin in Lviv. From 23 September to 7 October Ukrainians will understand the Danish way of life better.

Within two weeks, Lviv and the region's residents participate in a contest for bloggers, visit an exhibition of posters and a festival with Danish films, attending the opening of an information board about Denmark's honorary consulate in Lviv, and learn about the Danish experience in municipal services and energy efficiency in modern cities and meet with the Danish Ambassador. About this the Danish embassy in Ukraine reports.

Denmark is a longtime partner to Ukraine and seeks to expand its relations with all groups of the Ukrainian society. Ukraine is now in a state of fundamental change. Danish Days in Lviv is an opportunity to understand the Danish way of life better and to deepen the dialogue between the two countries.

Competition for journalists, bloggers and students' «Problems with urban life - which Danish experiences may be useful?»

Journalists, bloggers and students working and studying in Lviv and the region are able to participate in the competition. The two winners will have the opportunity to go on a study trip to Denmark. The Embassy of Denmark in Ukraine will cover travel expenses.

Works can be sent latest on 1 October 2016. The winners will be announced on 7 October.

Denmark is often a leader in the international ratings of happiness. Attempting to understand what makes the Danes happy – a way to learn more about Denmark, values and social standards in the happy country.

Thematic Exhibition shows the regularities researchers concluded there are for happiness, and what is common between happy people and happy society. The Exhibition will examine why Denmark is regularly rated as the happiest country in the world.

The first festival of Danish films in Lviv will be held from 29 September to 7 October.

Danish films have a large international audience and is known by Ukrainians from the film festivals Youth, Children Kinofest, International Short Film Festival, the festival Scandinavian Panorama and Festival of Danish Modern Films.

The program in Lviv offers the opportunity to see 10 films: the latest and classic Danish films. The films are shown in their original language with Ukrainian subtitles.

Opening of the information board about Denmark's honorary consulate in Lviv at the beginning of the 20th century will take place on 6 October. The goal of the project is to honor the history of diplomatic relations between the city of Lviv and different countries in the early twentieth century.

Discussion of Danish municipal experience and use of clean technologies in modern cities will be held on 7 October in Lviv ECO Forum. In the discussion there will be features on advanced environmental technology problem solving and «intelligent» life.

Meeting with the Ambassador of Denmark in Ukraine

On 7 October, journalists and students participate in the open meeting with the Ambassador of Denmark, Christian Dons Christensen. After the discussion the ambassador will announce the winners of the contest.

Facts. In Ukraine there are more than 100 Danish companies. Denmark focuses on the following markets: agriculture (production and sales of commercial equipment), clothing (especially for the middle class), machine building, construction and building materials, food, energy and environmental protection. Also the IT sector gets much attention.