Opening of Eurovision 2017 in Ukraine 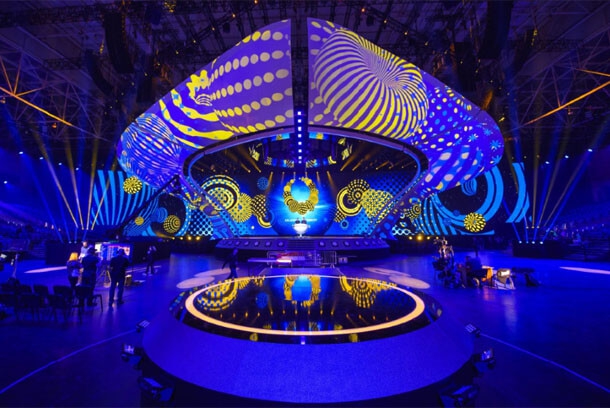 The stage for Eurovision 2017 at the International Exhibition Center in Kyiv on April 28, 2017. Photo: www.kmu.gov.ua

Kyiv is ready for the song contest, but there are threats of bad weather and of sanctions against Ukraine for violating the competition rules.

Today at 17:00 Ukrainian time, the official opening of Eurovision 2017 will be held in Kyiv at the Congress and Exhibition Center «Parkovyi». The chosen location will show Kiev in a modern and historical context.

62. Eurovision Song Contest will be held in Kyiv International Exhibition Center. It will be attended by representatives of 42 countries. Each delegation will walk on the red carpet, stop for photo shootings, make interviews and give autographs. At the roof of the center, each delegation will raise the flag of their country.

At the opening ceremony of the song contest, Ukraine in the National Academy Orchestra of Folk Instruments will participate, which will play a medley of Eurovision hits from previous years.

The red carpet will this year be the longest in the history of the competition and will be 265 meters.

The opening of Eurovision Song Contest 2017 ends with a celebration in «Euroclub». Thus, «Euroweek» begins, which will end on May 14 with the closure of «Eurogorodka» (Eurocity) on Khreshchatyk Street. During the next week there will be performances of Ukrainian and foreign stars, discos and other leisure activities, and on the big screen – broadcast from the main scene of the contest.

In Ukraine's capital, a concert was held in honor of the opening of Fan-Zone Eurovision 2017, Eurovision Village. It will work from 4th to 14th of May. There is free access, but visitors will have to be bodily searched by the security service.

On May 5, the General Staff of the Armed Forces in Ukraine closed the airspace over Kyiv at the time of the Eurovision Song Contest 2017.

Reminding: 9th and 11th May, the semifinals will take place and the 13th of May – the final of the competition.

For violation of the competition rules, sanctions may be imposed against Ukraine and Russia. This was previously said by the chairman of the European Broadcasting Union and the Eurovision Organizing Committee, Frank-Dieter Freiling. It was noted that the host country is obliged to allow all artists to participate in the competition without exception. Ukraine violated the rule by the ban on the entry of the Russian singer Yulia Samoilova.

Prehistoric: March 13, it became known that Russia would be represented by Yulia Samoilova. March 22, Ukraine forbade the Russian singer to enter the country because she violated Ukrainian legislation as she had held a concert in the annexed Crimea in 2015. Russia was offered to participate in the competition with Samoilova on live video or to choose another participant. The Russian side rejected both options, and the television channel Russia 1 refused to broadcast the competition.

Russia, on the other hand, has been absent from the compulsory preparatory meetings for the competition in Kyiv, which has also violated the Eurovision rules. The decision to penalize the countries is expected after the meeting of the organizing committee on July 12.

The competition rules set penalties ranging from fines to suspension of the country from attending the Eurovision Song Contest for three years.

Kyiv is carefully prepared to receive many guests. At the time of Eurovision, the city's metro, cable cars and land transport will continue to work.

Tomorrow, May 8, begins a week with Ukrainian cuisine. 100 restaurants have developed a special menu consisting of three price categories: 10, 17 and 28 euros. The idea of the festival arose because of foreigners. They often ask the organizers of the Eurovision Song Contest, where in Kyiv one can eat well. Chefs want to show that their country does not only make borsch and vareniki.

One can only hope that the weather will not ruin the party. Ukrainian meteorologists predict that from May 7 there will be rainfall and temperature drop may occur.