My experiences in Ukraine. Part 2 – Lenin and the City Art. 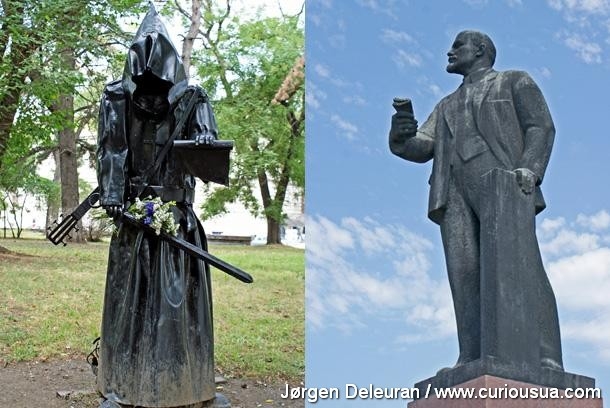 The journey continues in Crimea. How Danish editor at Curiousua.com experiences the Ukrainian peninsula. The second part of Jørgen Deleuran's tale.

My holiday apartment fully met my expectations. Entrance hall, toilet with bath, fully equipped kitchen with two dining chairs, living / sleeping room with sofa, coffee table, chair, TV and double bed. Refurbished not so long ago. As well as a balcony facing the Sevastopol Street. When I had settled on my stuff, I decided to go out and look at the city and buy some supplies for the fridge.

Down the street, I walked toward the main street of Kirova Boulevard, turned right towards the city center and a moment later I came to Lenin Square. I went over to study the statue that stood there on its pedestal and looked out over the people at the square. It was the first time I saw a Lenin statue in its "home environment" – in a country where Lenin had a direct political influence on the country's development and people's everyday lives. Previously I had seen the Lenin statue that stood in Isterød near Hørsholm (in Denmark), where it was located on a small mound at Tidens Højskole (High School Of The Time – the former mansion Nebbegård), which belonged to The Sailor's Federation. And that had created both discussion and outrage among people in the rather affluent area. Something that the sailor boss must have enjoyed, as he, as well know, liked to provoke. 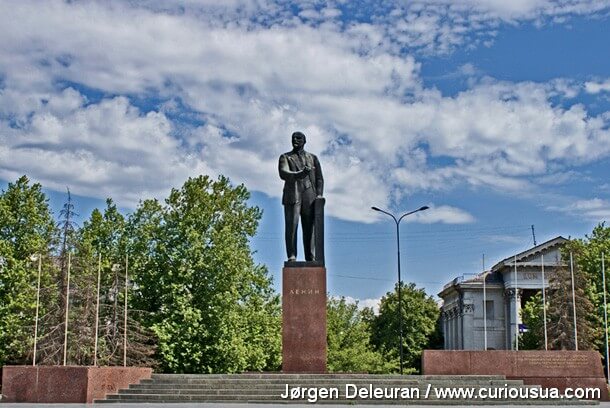 It must be appropriate here to tell how a Lenin statue ended up in Denmark. After all, the sailor boss was on the Danish left wing and had connections to various embassies from socialist and communist countries. One day, two diplomats from the Soviet embassy appeared in his office and asked him if he wanted to get a statue of Lenin. The sailor boss said that he would like that. He thought that it could decorate his desk. A few days later, he was called from The High School Of The Time with the message that a handful of Russians were walking around the scools grounds, taking a look at various places and making surveys. What was it about? Then the sailor boss contacted the Soviet Embassy to find out what they were doing. The answer was that they were investigating where the best place was to place the statue. Only then he realized that it was not a small statuette for his desk, but a several meters high statue.

From Lenin Square I continued and turned left into the pedestrian street Karl Marx Street. On both side of the street there were very beautiful and well-maintained buildings, and there were many people walking through the street, standing and talking, walking into or out of shops and cafes, or sitting on the benches, enjoying the good weather . A really nice place that I immediately fell in love with. 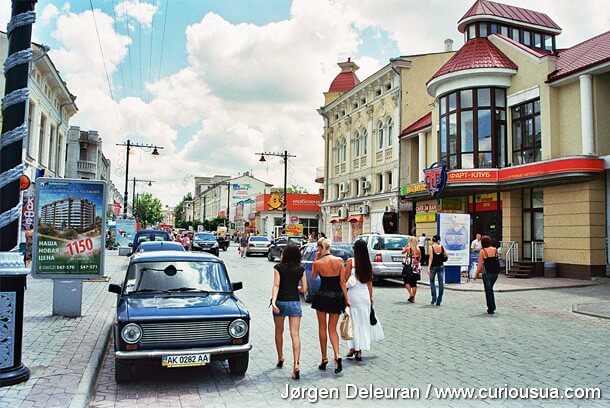 Karl Marx Street. Residents and business people are allowed to drive to and from the street at a slow speed. 2007.

Further up the street I came to the Parliament Verkhovna Rada. The building signaled, as that kind of buildings always do, power. You never doubt when you come across buildings where there are powerful people. 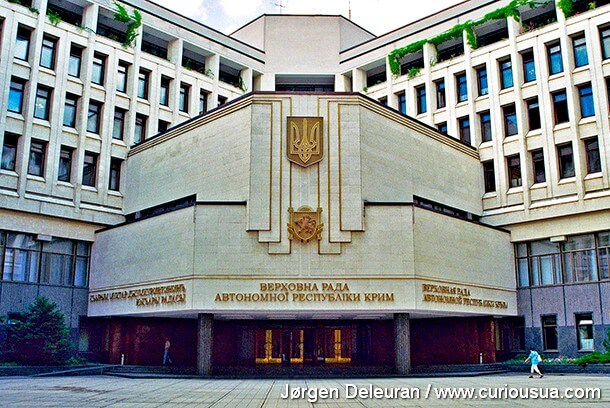 To the right of the Parliament I saw a small park which I went to. It soon became clear to me that this was a memorial for what happened during World War II – or, as it was called in The Soviet Union, The Great Patriotic War. On a foundation stood a T-34 tank, and on each side of it was a row of white columns, between which were black stone plates with engraved names. It was said that this T-34s had helped drive the Nazis out of Simferopol, and that the stone plates bore the names of Soviet soldiers who fell in the Battle of Simferopol and were subsequently buried there at the square. In front of the T-34s were large flower decorations. Later, I should realize that in Ukraine – and probably in other former Soviet states too – there are many memorials for what happened back then. They also have so much more to commemorate than, for example, we Danes have. Their sacrifices during the war were unbelievable. 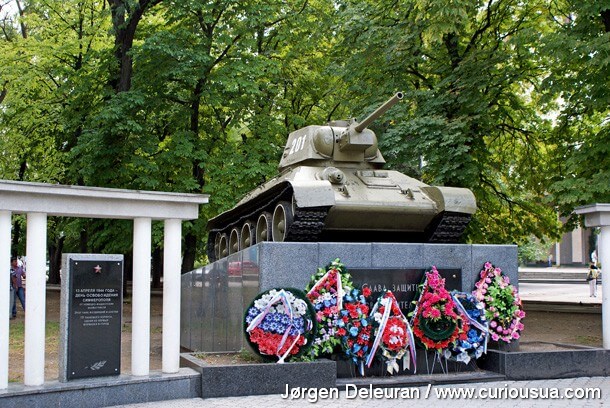 Victory Square with the T-34 that helped drive the Nazis out of Simferopol. 2010.

Right next to the Victory Square a building was underway. No ordinary construction. Very large with towers and onion domes. In other words, a cathedral. After all, it's not every day that new big cathedrals are being built, and I was curious to know what the cause was. It turned out that there had previously been a cathedral, the Alexander Nevsky Cathedral, which had been Crimea's largest cathedral, and which had been built in the years 1810-1829. The reason why it was no longer there must be traced back to September 27, 1930. There, on the orders of Josef Stalin, it was blown up. In recent years, there had been a lively discussion about whether it should be rebuilt. It ended up being decided that it should, and when it one day will be finished, it will again be Crimea's largest Russian Orthodox cathedral. 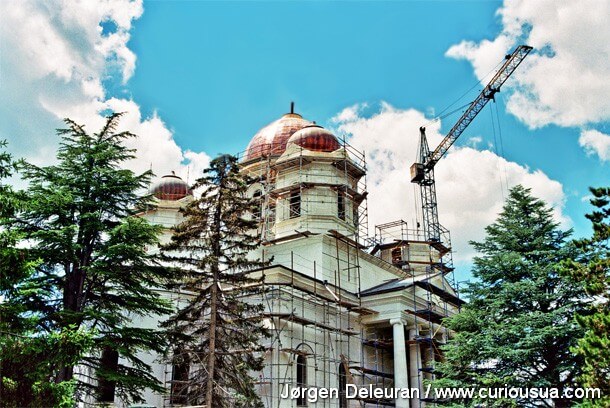 From the cathedral, I continued to the right on Rosa Luxemburg Street towards Kirova Boulevard. Where the two streets met, I found another park. Walking through this park was a special experience, because not only were the benches artfully designed, there were also numerous works of art. The two big "wheels" on which were mounted the twelve zodiacs. The dragon – without Saint George, but with his sword through its body. The man in the black cut, the sword in his right hand and the guitar on his back. To him I immediately gave the name "The Troubadour of Death". The motorcycle with wings instead of a rear wheel – and many other imaginative figures. 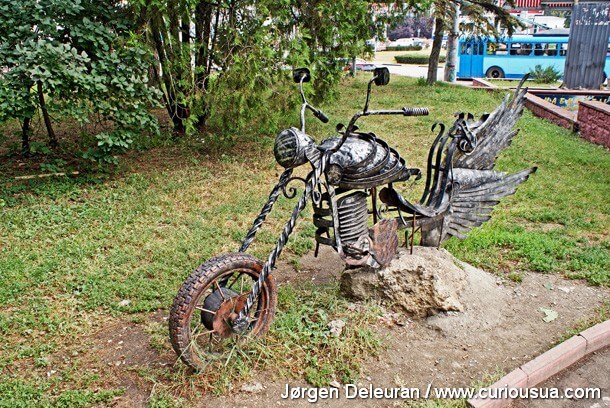 The motorcycle with wings – one of many works of art in the park. 2010.

In the park there was also an outdoor restaurant, which I went to. Here I ordered a dish with lamb and half a liter of beer. It was pure enjoyment, both in terms of food and beer, but also to sit there and enjoy the late but warm afternoon and the life that was going on around me.

Satisfied, I walked along Kirova Boulevard to the large and well-stocked supermarket Silpo, where I provided myself with what to use of food for the rest of the day and the next too. The next day I wanted to explore the city's markets where you can buy everything between heaven and earth – at least anything that has a size so you can carry it away. These kinds of places I find very exciting.

When I had brought my goods to the apartment, I lay on the bed and relaxed with my crime novel, which I had not finished reading during my train ride from Kyiv. Later I would go out into the town again to experience Simferopol by night.

Read 1219 times
Published in Others about UA
Tagged under