Hybrid war and the current situation in Ukraine 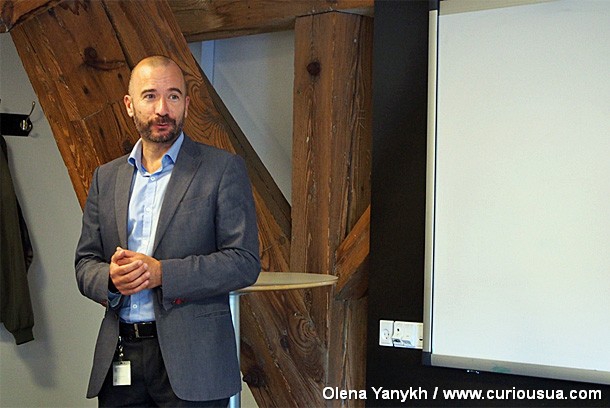 What is hybrid war, what kind of a situation is unfolding around Ukraine, how should the West try to handle it? What is the current situation in Ukraine with Crimea and eastern Ukraine, the Minsk 2 peace process and the entire international game related to it? That was the topics of a lecture that Flemming Splidsboel held in Danish-Ukrainian Society. This describes the first part of the lecture.

War or not war

According to Flemming Splidsboel in Denmark we talk about hybrid war, while in other countries they have gone on to mention that kind of war asymmetrical war or ambiguous war – ambiguous, because is there a war or isn't there a war. But these designations contains a hybridity too.

Asymmetrical war is a hybridity in relation to various actors who can do something different, with very different capabilities. Iraq and Afghanistan are examples of asymmetrical wars, we have been a part of, and which were enormously complicated to fight.

Ambiguous war has the element, is there a war or isn't there a war, as we can see in east Ukraine, which is something that we certainly got to get used to – that we must face types of war, which are different.

Hybrid war is both kinetic and non-kinetic

Flemming Splidsboel prefer the term hybrid war, because it is a reminder that it is a hybridity – a hybridity between two different elements. This is what we often call military and non-military. In the military, however, the terms kinetic and non-kinetic are used.

Someone may remember the term kinetic energy from physics lessons – it's such an energy that you can use to smash something. It is more accurate to use these names. When we (Denmark, red.) were in Afghanistan, we used kinetic means to wipe out the Taliban, but we also used non-kinetic means to try to influence the local population and to build up.

The hybrid war is the kinetic and the non-kinetic, which are fused together. But there is nothing new in it, it has always been like that. You use information operations and psychological operations, which there is much focus on in the ongoing conflict.

What perhaps is new is that we in a part of the West have woken up and are now seeing that there are some participants – who you normally do not associate with that type of war – who uses it. It is as if the rules have become a little diferent. In hybrid war all means are used. What works is what you use to achieve the desired results, and that is what one can see in the Russian thinking about hybrid war.

Russia on the other hand believes that it is the West that leads hybrid war against them. The exclusion of doping sentenced Russian athletes and the vote in Eurovision this year when Russia did not win, is seen as hybrid war. There are many items, ranging from the elementary – almost absurd – into something that is much more serious and tangible. In Russia's optics, hybrid war is everything which work against Russian interests.

Free media have difficulties in Russia

Information technology is widely used in hybrid war to control people's attitudes. There are a host of Russian state-controlled media, but there are also free media. If free media become large with many viewers, listeners or readers, they risk such as the tax authorities will say that the media has not paid taxes and therefore will be closed. It arises again under the same name, but with a new editorial staff that follows the state-controlled media line.

We are facing a particular challenge because the message coming from Russia, is very massively. There is some free media, which tells about the situation in eastern Ukraine and talks about killed Russian soldiers. But it has been enormously difficult for them to do it and most of the media will not do it.

Information technology is used among other things to influence the Russian-minded in other countries to create disturbance, to get the chance to send special forces in and take a bite of a territory and say that now this is ours.

Estonia, Latvia and Lithuania feel extremely vulnerable, but Flemming Splidsboel Hansen do not think they are so vulnerable as they really think. This does not mean that they deliberately exaggerates, but they are probably more anxious than they need to be. The cohesion in these countries is probably greater than they fear.

In Estonia and Latvia has been made studies pointing in the direction that the Russian-minded are not really that mobilizable, as we sometimes think. In both EU and NATO they are taking hold of some of the stories that come from the Russian media and puncture them. It is a defensive approach, and there has been talk about turning to be offensive – to make more aggressive information campaigns by the West.

How to paint themselves into a corner

Flemming Splidsboel Hansen believes that the West increasingly must learn to deal with what comes from Russia. There is a debate and free media, but at the same time we see a media landscape that is very controlled. However, in Russia – in relation to eastern Ukraine – there is a creeping realization that they might have gone too far in the way they have portrayed them.

Politicians would like to have two exits, one of which shall be an emergency exit. It is very rare that politicians deliberately are painting themself into a corner where they have no options. They can choose to do so sometimes, as it happened in Crimea. For the Russians it means so much that no matter how many penalties you throw against them, they won't give up but are willing to sacrifice their entire political career on it. And the politicians may have an interest in it.

But regarding to eastern Ukraine, there is a creeping realization that they have painted themselves a little too much into a corner by saying that all of them are Nazis, fascists and banderists and by warning about pogroms. And it means that it is extremely difficult to make concessions. But it also illustrates how you can use the media, and how you very unilaterally can display these special pictures, and that it can be hard to pull back, when you at some point wish to do so.