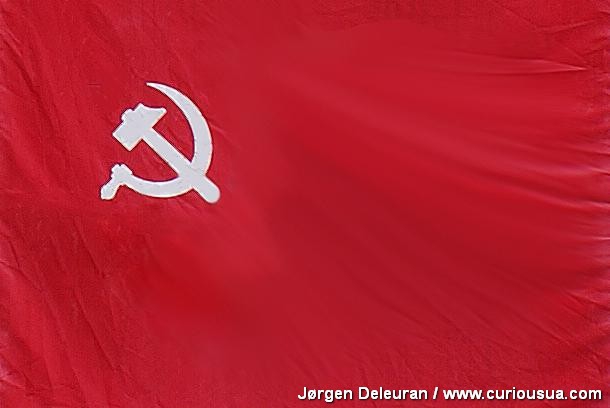 In Denmark the Russian propaganda is done on several levels: individuals, small political groups and medias, which is owned by Danes or Russians. Some of the medias are made for the purpose of promoting the policy of Putin.

Among the individuals are Russians and Ukrainians living in Denmark. They sympathize with Putin, and together with their Danish spouses, they make propagande for Russia to family, friends, colleagues and others with whom they are in contact. They receive much of their information from the Russian propaganda medias – such as Russia Today (RT) – and trust what they are told here.

Some are also active on Facebook, where they comment on when they see mention of Ukraine. Here they accuses the Government of Ukraine for being fascist or even Nazi, to suppress ethnic Russians in Ukraine and for exercising state terror against them. It has also happened that a few have turned up at the demonstrations where people are supporting Ukraine. Here they shouted "fascists" and other epithets. Once someone beated a Ukrainian protester.

In the following examples, the characters are anonymous, since we do not want to expose individuals to public contempt. What is important is the character of the comments.

When a Facebook user expressed support for Ukraine's attempt to refute the pro-Russian aggression in eastern Ukraine, he received the following comment from a Dane who is married to a Russian woman:

.. are you kidding me? Do you support the fascists in their murderous assault on the brave civilians and weakly armed freedom fighters in the east?

After the Ukrainian army liberated Slavjansk, there was a numerous crowd of people in procession through the city bearing Ukrainian flags. On Facebook a man told about this and received the following comment from a Putin-friendly Dane:

- and today it is posible because of (state-)terror!

Propaganda from the Danish left wing

A party making Russian propaganda, is the small Communist Party (formed by a merger of the Danish Communist Party – Marxists / Leninists and Communist Coalition), which is without any political influence. However, its supporters are very loyal and trust the leaderships judgment about the situation in Ukraine.

The Communist Party is the owner of Dagbladet Arbejderen (The Daily Newspaper The Worker). Here they have brought a series of articles in which they defended Russia's conduct in Ukraine. They argue that Russia protects ethnic Russians against assault from the fascist government of Ukraine.

The newspaper quotes the Russian journalist André Vltchek, which is closely linked to Russia Today. He asserts that Ukraine is a country where almost everything is stalled, where they stopped growing anything in the fields, and that Ukraine's agriculture hardly exists today. The claim is completely at odds with reality. When you travel through Ukraine, you see fields of sunflowers and grain, as far as the eye can see. Danish farmers who have bought farms in Ukraine, can also confirm this.

A quote that shows the newspapers kind of propaganda: "The election" on February 22 of oligarch, chocolate king Petro Poroshenko was ment to add a democratic flavor to the fascist coup in Kyiv.

Regarding the talk of fascism and Nazism, it should be mentioned that Verkhovna Rada (The Ukrainian Parliament) has 450 deputies, of which 37 can be said to belong to the nationalist right wing. At the last presidential election only 2% of the population voted for the nationalists, which is far less than in most Western countries.

Enhedslisten (Unity) is against Russia's aggression, but ...

A left-wing party which has some political influence is Enhedslisten (Unity) – (an association of Left Socialists, Danish Communist Party, Socialist Workers Party and Communist Workers Party). The party does not support the pro-Russian terrorists in eastern Ukraine nor Russia's role in the conflict. In fact, the parliamentary group took strong exception to the separatists, and expressed clear support for sanctions against Russia.

However, people with a more radical and totalitarian mind can be found in the party. Among these, there are positions coincide with the positions in the Communist Party when it comes to the Russian aggression towards Ukraine. On social medias these members trays up on Putin's behavior in Ukraine.

The majority in Denmark is on the side of Ukraine

Fortunately, the vast majority of Danes, the Danish political parties and the medias understand that it is Russia who is the aggressor, but it is surprising that some on the left wing are so excited about Putin's policy, which has nothing to do with either socialism or communism. One explanation may be that they former were excited by the Soviet Union, where Putin was part of the power unit and that they want the Soviet Union to be revived. Another explanation may be that in general they are excited about totalitarian regimes – when just it's their kind of totalitarianism.