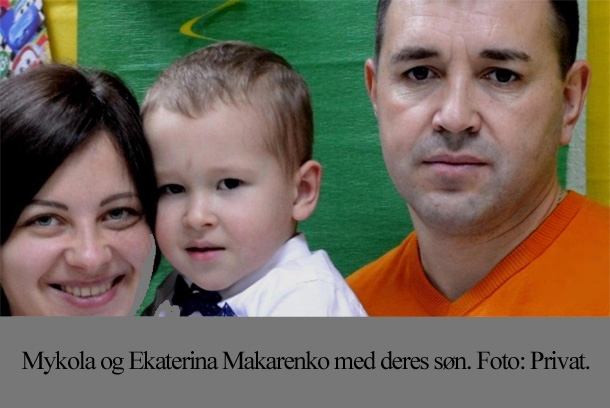 A case of an occupational accident that cost the Ukrainian Mykola Makarenko his life, has after 3 months not yet triggered compensation for the widow.

Every third employee in Danish agriculture comes from abroad. One of them was Mykola Makarenko. On October 12, 2017, Mykola died during the performance of his work. He was 34 years old and left his 31-year-old wife Ekaterina and two children – a boy of 4 years and a girl of 8 years.

Ekaterina Makarenko has contacted Curiousua.com and told about the accident and grief and the economic disaster that the accident has cost the family. Ekaterina has not yet received any compensation for the loss of her husband and the family's dependents.

Mykola Makarenko had been put to clean a grain silo by the farmer Knud Puge Kjær Knudsen on Bukkerupvej 67 near Tølløse on Zealand. A few hours later, he was found dead near the bottom of the silo. Mykola was sunk down through the grain and did not have a chance of survival.

The Labor Inspectorate subsequently found that Mykola Makarenko had not received instruction to work in a grain silo, had not been fitted with a safety line and that the warning signs were unreadable.

Refuses to be the employer

Fagbladet 3F (magazine from the workers union 3F, red.) has previously written about the case, and the newspaper's access to the file shows that the Labor Market Occupational Insurance Fund, which aims to address the issue of so-called transitional benefits and compensation to the widow and children, has not been able to get answers to the questions they have given to Knud Puge Kjær Knudsen. Nor did a reminder give any result. On January 4, 2018, the farmer then in a telephone conversation told that he was not the employer of Mykola Makarenko at all. The employer was his father Peter Kjær Knudsen. Father and son jointly own Kjaer Knudsen Agriculture A/S.

Curiousua.com can reveal that an agency named Euro Power is domiciled in the Dutch city of Heeswijk-Dinther at Vostenbosseweg 4a. The company's full name is Uitzendbureau Euro Power B.V., and it has approx. 50 temporary staff affiliated.

The agency states that it can provide the complete staff administration so its customers do not have to spend time on the ordinary employer's obligations such as payroll and insurance.

The very issue of insurance is central to the case, as it is from here, the widow and the children must be compensated for loss of spouse, dependents and father.

Curiousua.com has tried to get Peter Kjær Knudsen's comments on the case, but it has not been possible.

Links to articles in Fagbladet 3F in Danish: