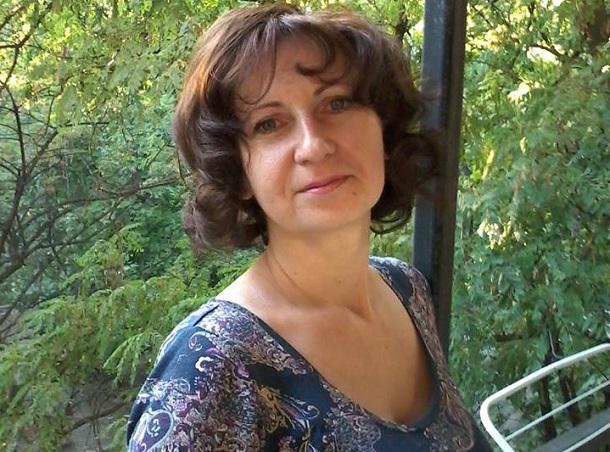 A resident of Donetsk, mother of four Oksana told about her family’s life in the city at the moment.

A couple days ago by a twist of fate I happened to be at the opposite end of the city, near the border with Makeyevka. At the first time during the war I saw a checkpoint. The road was blocked by concrete blocks both directions. Once in a while DNR fighters came out to the checkpoint, but did not check anybody. That's where I saw the sign, «Donetsk is our love». Obviously this sign has been there since Soviet Union time.

For last couple months many people realized that our city is like alive organism, near and dear one, which is being blown up and bombed every day «without a break for lunch». And it hurts you so much as if it’s you who is wounded. I was not born in Donetsk, but my youth, student years, my first love are connected to the city. This is my home and I really want the war to end. And for most citizens it already does not matter who comes to power next, the city just need peace.

Despite of firing Donetsk continues living. Public transportation is working, stores are open, markets and hospitals are functioning. Who did not leave the city stopped paying attention long time ago to the sounds of explosions coming from suburbs. In the area of Donetsk where I live you can hardly hear them. The summer is over, the weather is cold now and all windows in the apartments are closed, so you have to go outside to hear anything.

It’s more difficult for people who live in Petrovka and near the airport; these people have been under firing since June 26. There are no "days of silence". Sometimes I call to my friends who live there. They didn’t leave, just got used to the firing. They are, if you may say so, «lucky». They have power, gas, water on certain time of a day, and windows are not broken in the houses.

Nobody from my friends are killed or injured, maybe that’s why I'm so optimistic. Besides I have children, I have no right to show weakness or fear, otherwise they will flinch even from the sound of trucks going over speed bumps.

I did not leave Donetsk, decided to stay with my eldest son and cats. It was a conscious choice. But I sent younger children to my parents. Even on the side of «front line» they heard firing in Donetsk every day. 30 km is not a distance for a war. When ground-to-ground rockets or heavy artillery are firing, the earth is shaking in a few kilometers, and until you get used to it, it's terrifying.

Perhaps we have all became fatalists, you can't fight the fate. I told myself, if a racket hits me, I won’t hear anything. It helped stop fearing and shivering from every sound. It’s more difficult for those people who are returning to Donetsk recently. They need time to get used to it. Once I asked a girlfriend who had spent three months in the Crimea: «Are you ready to leave Donetsk and start a new life in a different place? No. So, stop flinching at every sound. Take it easy».

What you cannot get used to

What is happening now is not scary any more. The worst day was when our district was under fire. When you wake up in the morning from these horrible sounds, you realize, it is not far from you. Half asleep you do not know what to do, and your fifteen year old son is already lying on the floor behind the couch and covering his head with his hands. Honestly, it is impossible to prepare yourself for this. You can set up a bomb shelter, prepare an «alarming suitcase» with documents, medicines and warm clothes, but there are no words to describe how you feel at this moment. You have to go through this to understand.

Therefore, when I read comments in social networks that all this is fault of citizens of Donbass and we deserve it, I have nothing to say. I do not want to argue. People are watching only Ukrainian news and get a one-sided coverage of the situation. And we have an opportunity firsthand to see what is going on. We did not call the war to our own land, did not call mercenaries, volunteers and so on. Both sides are shooting, but civil people are suffering. This situation, in my opinion, could have been resolved last spring, but authorities in Kyiv were too busy carving up power. Politicians screaming «War to the bitter end» only disgust me. It’s important to find a compromise, we do not need a war; we do not make money from a war.

You can find information

Why did people go to a referendum on May, 11th? Probably because they were tired to choose between candidates thinking: «Well, this one is not as bad as that one. Or maybe he will steal less». And now Ukraine is about to have a new elections. Again endless political PR-show, and again the same faces. It’s sad.

By the way, some internet providers in Donetsk broadcast Ukrainian channels, and of course, many people have internet here, so I do not consider myself a zombie of Russian news. In May and June I did watch «Life-news» because they give the most updated information. Then I found a few Ukrainian news sites that try to cover the situation truthfully. By the way, speaking of staged shots with Russian journalists, I do not believe in it. The city is half-empty, there is no traffic jams, there are no many cars, so get quickly to the opposite side of the city in a few minutes is very possible.

Now all my kids are with me. On October 1, schools were opened, classes began, but the lessons are shorter, only 35 minutes. Again, we are «lucky»; the school is across the street. All teachers are in the city, no one left. Classes, of course, are not full, about 60 % of the children are back. In our pediatric clinic doctors also are working. I am not scared to let older children go out to play, sometimes I even say, «Go out to play, that's enough to sit in front of the computer».

In the city there are many police cars, watching the order. You can often see military people with machine guns. My daughter was afraid at first, now she is not even paying attention to it. I have not seen Chechens or «people with a Russian accent» among them. By conversation or behavior you can tell, they are local. I cannot call them terrorists because I do not feel threat from them.

Past and present without future

There are less choices in the stores and more deficit of cash. Many people have lost their jobs and are eating up their savings.

To be honest, we are still clinging on to the past peaceful life. Although it’ll never be the same, we all understand that, but still do not admit that. We are living for the moment. It’s certainly not good, but these are the rules of the game now.

The other day my daughter asked: «Mom, do you believe in miracles?» I answered: «Well, yes, probably». And my little philosopher said: «No, there are no miracles, it is only illusions». This is how we are living now, with illusions, not admitting ourselves that it is happening here and now, not in the parallel reality.

But we will survive, make no doubt about it!