Annexation of Crimea 2014: One morning there were foreign soldiers in the streets 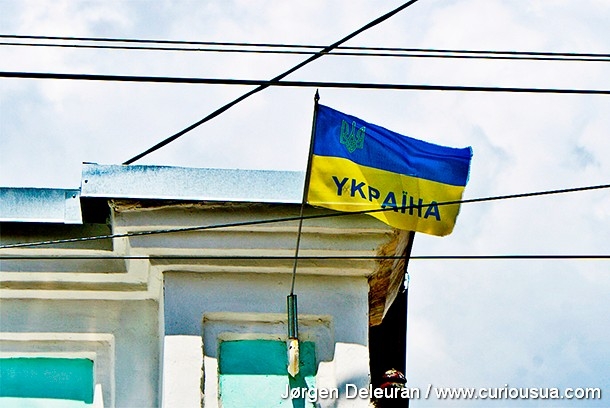 «I hope I live long enough to experience the liberation of Crimea.» The Ukrainian flag on a house in Simferopol in Crimea. 2013. Photo: Jørgen Deleuran.

Volodymyr is from the Ukrainian peninsula Crimea, which in 2014 was occupied by Russia. He has chosen to remain a Ukrainian citizen.

I meet Volodymyr at a café in a European metropolis. For many years I have been travelling around Ukraine and also to Crimea, so I am interested in hearing how Volodymyr views the situation and what life is like in Crimea today. I offer him a cup of coffee. We both choose to drink espresso.

«One morning I discovered that the Russian flag was waving from official buildings. In the streets there were foreign soldiers. It was a shock,» he says. «I never thought anything like that would happen.»

I tell him that in 2004 I was walking in the streets of Simferopol, the Crimean capital, when I discovered a small poster that had been put on a wall. I know a little Russian but not enough to understand the whole text. However, I could see that it was about Russia and Crimea. I was with a Ukrainian friend and asked what was on the poster. The answer was that there were some who wanted Crimea to belong to Russia. «But they are not many, and it will never happen,» my friend said.

«They weren't quite many either. Before the occupation, the Prorussian party only got 1% of the votes,« Volodymyr says. «Then they came with their soldiers and tanks and said we should vote and promised a lot. Among other things, they promised that pensions would increase substantially. Only about 30% voted. Most old people who had grown up in the Soviet Union. They voted yes because of nostalgia and because they wanted higher pensions. They got that too, and then they suddenly considered themselves to be rich. But then all the prices went up. They rose and rose, and pensions were worth less than before.»

They teach kids about firearms

I ask him how the situation has affected him.

«For 3 years after the occupation, I was depressed, but then I decided that it didn't change anything, so now I try to get the best out of life. One of the things that still makes me sad is that there are soldiers and tanks everywhere. At public events, people are searched. They even search children. It is also really bad that they are teaching children how to use firearms.»

«The Russians have made a new road from Kerch in the east to Sevastopol in the west. They have used materials from the mountains, which are now left with big ugly craters. They have destroyed the nature. It is not made for the sake of the people, so the citizens have a fine road to drive on. The road is made for the Russian tanks, so they are able to move forward easily.»

When Russia occupied Crimea, many Western and Ukrainian companies moved away. This also applied to banks, so I want to know how banking works today.

«Our banks are fake banks. You cannot send money abroad or receive money. Their credit cards are worth nothing, because they only work in Crimea and in certain major cities in Russia,» he answers.

Frozen in the Soviet era

Volodymyr says he does not want to be a Russian citizen. Therefore, he has retained his Ukrainian citizenship.

«Russia is frozen in Soviet times. So is Crimea now too. Now I realize how much better it was under Ukraine. And if I had a Russian passport, I wouldn't be able to travel the world. I would only be able to travel to Russia. Only Russia recognizes Crimea as Russian. The rest of the world does not. If you want to apply for a visa to another country, they say that Crimea is not on their list of Russian territories, and then you get a visa refusal. As a Ukrainian citizen, I can travel anywhere. I can go to an EU country and they ask about nothing at all. Those who still hold on to their yes to Crimea being Russian say it is good enough that they can only travel to Russia. These are people who do not understand the value of freedom.»

I ask Volodymyr if he thinks that Crimea will ever return to Ukraine.

«I hope I live long enough to experience the liberation of Crimea,» he replies.

We sit in silence for a while. Together, but alone with each of our thoughts. However, they are probably about the same, I order one more round of espresso, and our conversation turns to a more comfortable topic. His journey and mine and our experiences. Half an hour later we part. He continues his journey and I continue mine.